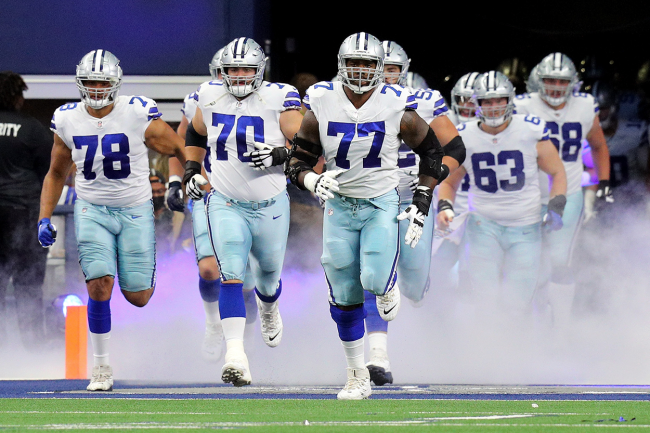 The Dallas Cowboys decided to select a tackle in the first round of the NFL Draft on Thursday. While the pick itself was a great move to get Dak Prescott some much-needed protection, it made things very, very confusing.

As things currently stand, the Cowboys have Tyron Smith as their starting left tackle. Smith was picked in the first round of 2011 NFL Draft after being named the best offensive lineman in the Pac-12 in 2010.

Although he has dealt with injuries on and off, Tyron has anchored the line on the left side ever since. He has been a first-team All-Pro player twice in his career and reached the Pro Bowl eight times.

While the plan, as of now, appears to be to keep Tyron at the left tackle position, Dallas’ first round pick in 2022 might push him over to the right side. If not this year, then with time.

Regardless of who plays where, it is going to be very difficult to tell the Dallas Cowboys’ offensive tackles apart.

On Thursday night, the Cowboys selected another tackle with the No. 24 overall pick. He, too, is T. Smith.

Tyler Smith, a 6-foot-6, 332-pounder out of Tulsa is set to be a very solid tackle in the NFL for years to come. He will play opposite of Tyron, which makes things super confusing.

When Dallas takes the field on offense, ‘Smith’ will be on the back of both tackles’ jerseys. And if they want to add the first initial of their first names to help clear things up, it won’t— they’re both ‘T. Smith.’

Perhaps we will get the first-ever instance of full first and last names on the back of their jerseys?