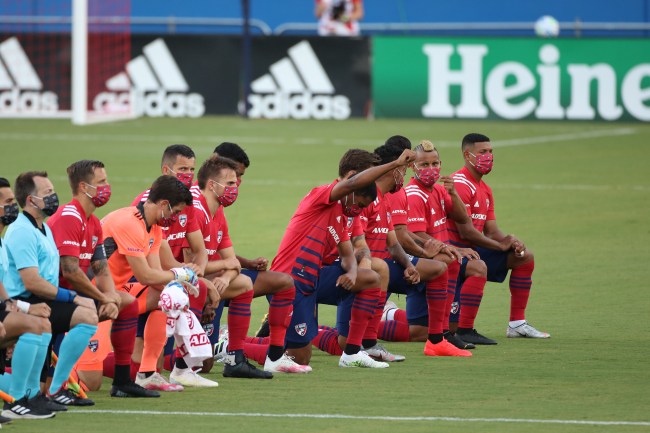 FC Dallas defender Reggie Cannon had some harsh words for FC Dallas fans after they booed and threw objects at their own players for kneeling during the national anthem to protest police brutality.

On Wednesday night the MLS welcomed fans back into its stadiums for the since the coronavirus pandemic began in March. 3,000 fans were allowed to attend the game in Frisco, Texas, but things got off to a rocky start when they reportedly booed and threw objects at players for kneeling during the anthem

Fans were able to attend an MLS game in Texas.

They booed players who knelt during anthem. https://t.co/ZkAq8auDXE

ICYMI, last night fans in Dallas booed and threw objects at the players who knelt during the anthem. Disgusting. Utterly disgusting. Feel bad for everyone that had to play a match after that. Team and League should be speaking out loudly against this. Step up.

After the game, Cannon spoke the media and called the fans “disgusting” for booing players who decided to take a knee during the anthem.

Dallas fans were booing at the stands when FC Dallas team knelt and Reggie Cannon spoke about it in the press conference
#BLM #BlackLivesMattters #DTID @FCDallasFR1
🎥 FCDallas pic.twitter.com/ND95bPzvtM

“I think it was disgusting. I think it was absolutely disgusting,” Cannon said, according to MLSSoccer.com. “You got fans booing you for people taking a stand for what they believe in. Millions of other people support this cause and we discussed with every other team and the league what we’re going to do and we’ve got fans booing us in our own stadium. How disgraceful is that? Honestly, for lack of a better word, it pissed me off. … You can’t even have support form your own fans in your own stadium. It’s baffling to me.””

FC Dallas released a statement this afternoon showing support for players who knelt during the anthem.