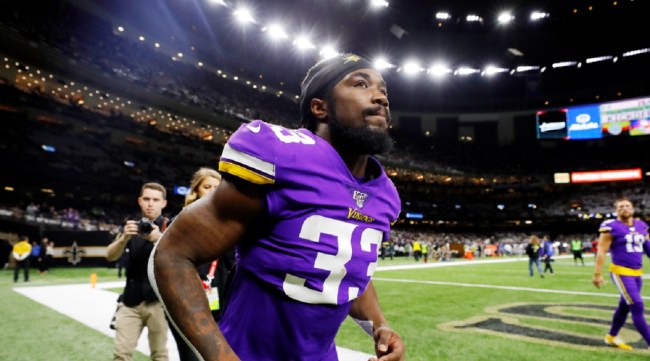 On Tuesday night, Cook’s agent released a statement claiming the Vikings running back was a victim of domestic violence and extorted by his ex-girlfriend, who “unlawfully” entered his home and assaulted him.

So we spoke to Hiller. Here’s what he told PFT by phone.

Roughly a year ago, someone unlawfully entered Cook’s house. The female who did it, is a sergeant in the U.S. military, attacked Cook in his home while he had a guest present. The invader then allegedly tried to extort Cook for millions of dollars, claiming that she suffered injuries during the course of the attack that she allegedly initiated.

Because she allegedly entered Cook’s house illegally, he had the right to defend himself, as authorized by Minnesota’s version of the Castle Doctrine. Litigation, per Hiller, has not yet been commenced, but it’s in the process of being initiated. No criminal complaints have been filed in connection with the incident.

The woman contends that Cook got physical with her when she attempted to get her things from his home after breaking up with him.

Gracelyn Trimble is 5'5" and alleges the @Vikings Dalvin Cook, 5'10", assaulted and falsely imprisoned her. He claims she attacked him. Here are pictures she filed as exhibits to her Dakota County civil lawsuit. She says she suffered a concussion, cuts and bruises. pic.twitter.com/zkexo2WZFd

According to the lawsuit, Cook and Trimble met on a Florida beach in 2018 and began an off-and-on, sometimes rocky relationship.

Trimble flew to Minnesota on Nov. 19 to break up with Cook and get her things from his Inver Grove Heights home. She entered through the garage, grabbing mace she stored there on her way in, the lawsuit said.

Trimble claims in the filing that Cook got angry when she asked for his help in gathering her things. Cook “grabbed her arm, and slung her whole body over the couch, slamming her face into the coffee table and causing her lower forehead and the bridge of her nose to bust open.”

She attempted to spray the mace at Cook, but he overpowered her, and the mace went into her eyes, the lawsuit said. She went to shower when she was allegedly assaulted again.

Then Trimble went into the bedroom, grabbed Cook’s gun, and called her friend, according to the lawsuit. Cook overheard her and threatened her, and beat her with a broomstick, the suit claims.

The next morning, when Cook took her to the airport, Trimble covered her injuries with a hooded sweatshirt, sunglasses and a face mask. On Nov. 25 in Florida when she sought treatment for her injuries, she told medical personnel she had been in an ATV accident. She learned she had a concussion along with several deep cuts and bruising, the lawsuit said.

The woman went on to release text messages from an apologetic Cook to prove that she was the victim of domestic violence in this case.

Text message between Vikings Dalvin Cook and ex girlfriend who filed assault complaint against him from alleged November 2020 incident. pic.twitter.com/wwjUDoPYRi

The NFL has released a statement and will be looking into the matter.

Vikings’ statement on Dalvin Cook contending that he was attacked: pic.twitter.com/4R3q94mIFI

Cook’s lawyer also released a statement in the case.

Statement from Dalvin Cook attorney, David Valentini, in response to a civil lawsuit filed today by a woman alleging that Cook assaulted her in 2020: pic.twitter.com/d1cOsV3tT7