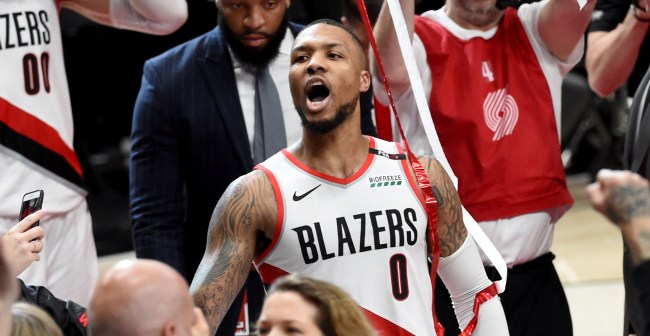 Can you believe that there are contributing members of society that still empathize with Antonio Brown? Like he’s not even a fun douche, he’s just an annoying petulant child douche. He’s got zero Ochocinco in him. No charisma. Just a wildly talented football player who thinks the sun shines out of his own ass.

Damian Lillard, a basketball player who I respect, is one of the few remaining public figures who is on Team AB after the receiver threatened to assault his general manager for fining him for failing to show up to his job.

Dame grew up in Oakland and has been a huge Raiders fan ever since, to the point where he got the Raiders logo tattooed on his shooting arm’s elbow crease last summer.

Looks like @Dame_Lillard got some new ink this summer, including a @RAIDERS tattoo pic.twitter.com/TBOmD2EzR7

TMZ ran into Lillard at the NBA 2K20 event in L.A. on Thursday and asked him about where he stands on the saga. He firmly stands with the douche.

“I don’t think they should cut ’em,” Lillard said … “I think it’s a 0% chance they cut AB.”
“Because if they do that, I might have to get my tattoo removed.”

The Raiders may have a possible out if they decide to part ways with AB. A suspension for conduct detrimental to the team could void all of the guaranteed money that he “earned” from Oakland in March. Brown’s salaries over the next two seasons (combined $29.125 million) could become no longer guaranteed. AB also voided $500,000 of his $1 million signing bonus for failing to show up to at least 85% of offseason practices, so the Raiders could wiggle away scot free. I want that to happen desperately.
https://www.youtube.com/results?search_query=damian+lillard+antonio+brown