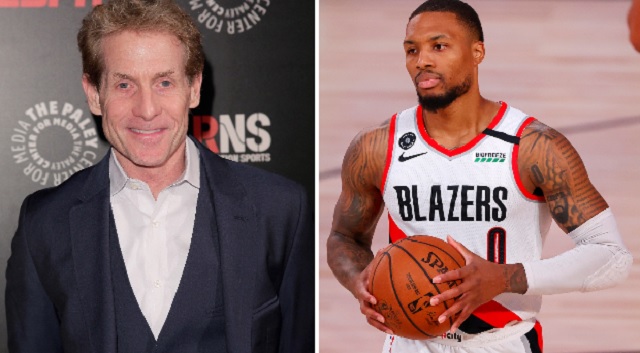 The beef between Damian Lillard and Skip Bayless continues to escalate.

On Monday, Lillard took aim at the FS1 host for talking trash about him on his show and on Twitter. According to Lillard Bayless was a complete person than his over-the-top on-air person when the two spoke on the phone in private.

I have never been buying nothing about you fam. You a joke. And after our private convo full of back pedaling you will never have my respect 🤡 https://t.co/do0yxFgUju

Ask him what he said when I asked him “ and why you always hatin on Bron ?” https://t.co/0FFrB7CRSV

Lillard would later go on Carmelo Anthony’s podcast to reveal the details of his private phone conversation with Bayless back in May and says the FS1 host backpedaled the whole time they talked.

I could make him look bad right now but I’m not going to do that but he backpedaled the whole time on the phone…He got my number and called me and when he called me I was like bro I don’t know you like that, you don’t owe me no explanation, stop speaking on me incorrect for your ratings or whatever, he just backed out and said you know I’m depressed

Skip provided a different version of what went down and claims that instead of backpedaling, he doubled down on his criticism of Lillard during their conversation.

Skip basically saying @Dame_Lillard is a liar on @undisputed , says that he didn't back down instead he doubled down on his criticism of Dame when they talked on the phone. https://t.co/hhscrT3Gpz pic.twitter.com/MLU7sEJMUm

I got a text from Damian Lillard saying what have you done to challenge what I have done…so I called him ,right off the top I tried to be civil with him but it was clear that he was agitated with me, the first thing I explained to him was that I was really worked up, I was scathing in my commentary to you because we were in the middle of a pandemic, so I told him I got overemotional and now he’s saying I backtracked but that wasn’t the guts of our conversation because I doubled down on the basis of my commentary…we go back and forth on and one and it started to get heated.