Damion Lee’s Final Minute Sequence In Steph Curry’s Return Game May Have Been Tough To Watch, But It Wasn’t All That Bad 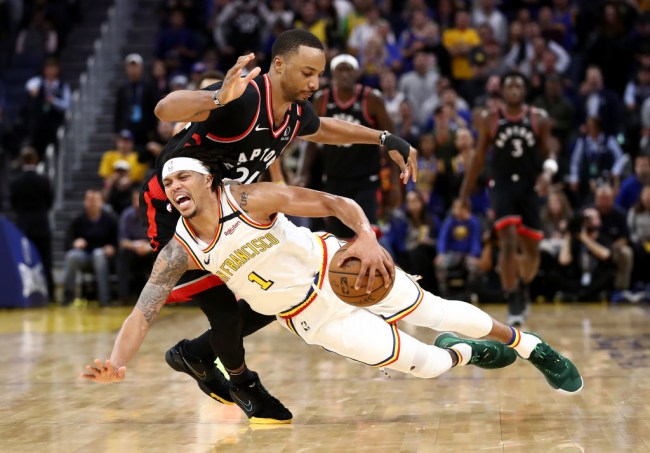 Steph Curry returned to the court on Thursday night for the first time since breaking his left hand on October 30. Despite the fact that the Warriors occupy the basement of the NBA standings, there was plenty of hype around Curry’s return for obvious reasons, but also due to the fact that it was a rematch of last season’s NBA Finals with the Raptors in town.

Curry put together a strong performance picking up 23 points, seven rebounds and seven assists in just 27 minutes played. It wasn’t necessarily a great night for him, however, as the Warriors fell 121-113 with the final 25 seconds of the game being flat-out brutal.

Damion Lee, who finished the night with 23 points, went to the free-throw line with 25.3 seconds left in the game with Toronto’s lead sitting at 117-113. The game was still far from over at this point, but Lee bricked both shots from the charity stripe.

Good news for him, though, as the Warriors got the offensive rebound and found him for a wide-open three-point attempt from the top of the line. Bad news, he put up another brick. Golden State picked up the rebound again and hit Lee again up top where he managed to drop the pass then commit a foul to essentially end the game.

Damion Lee misses 2 free throws, misses the 3, turns it over, then gets hit with the clear path…not a way to end the game pic.twitter.com/lv8kKc6SlX

It’s totally fair for people to rip on Lee for his efforts late in the game, but it may not have been as bad as it seemed, really. Sure, the two missed free throws hurt and is flat-out unacceptable in the NBA, but he absolutely had to pull the trigger on the wide-open three, Curry was being closely guarded in the moment. He was 5-for-11 from deep on the night up to that point and it was a perfect look, he just caught a tough break as it rimmed in and out.

Curry was quick to come to the defense of his teammate following the game.

Lee has been productive for Golden State this year averaging 12.5 points, 4.9 rebounds and 2.7 assists per game.