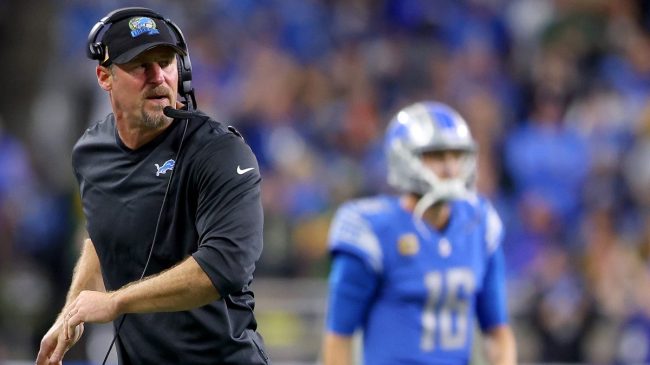 The Detroit Lions shocked the Green Bay Packers in Week 9 after taking home the victory. Their defense finally stepped up and helped secure a big win over a divisional rival. Now, head coach Dan Campbell shares his reaction to the win in hilarious fashion. As usual.

During the post-game press conference, Campbell shared his thoughts about the game. However, someone asked the Lions’ head coach how he felt about the win. As usual, Dan Campbell delivered an odd response, that actually makes him the most relatable coach in the NFL.

Dan Campbell: ‘Be honest with you I’m exhausted. I wanna go home and drink a beer.’

Campbell is just a guy’s guy. Who doesn’t enjoy a nice cold beer after a long day at work? Especially when it was a highly stressful day. The Lions’ head coach certainly deserves that beer after taking it to Aaron Rodgers and the Packers. Here’s to hoping the mountains are blue when he gets home.

At the end of the day, this was a massive win for the Lions. Especially considering they’re dead last in nearly every defensive category. Additionally, it’s nice to see someone like Dan Campbell secure a win, as he’s incredibly easy to root for.

Maybe Detroit can string together some wins here in the back half of the season. It’ll be hard to do, but it’s not like the Lions are completely out of the running just yet. Look for Dan Campbell to rally the troops for Week 10, as his team faces off against Chicago Bears.