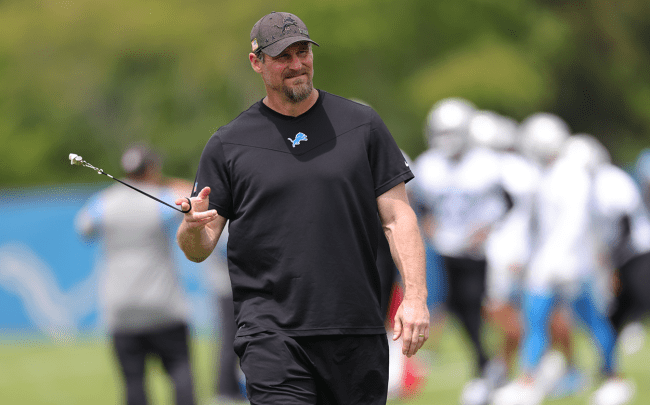 Dan Campbell does mess around. He is a no-nonsense, all-business kind of guy and he says what he means and he means what he says.

Campbell is also a player’s coach. The 46-year-old loves his guys and is willing to go to war with them each and every Sunday.

On Wednesday morning, before the Lions took to the gridiron for the opening day of training camp, Campbell — who was presumably heavily-caffeinated — had the most Dan Campbell reaction to a rogue phone alarm during his press conference. Not long thereafter, he took the field alongside his team and got the 2022 season underway.

To do so, Campbell pulled another incredibly on-brand hardo move. Despite being more than 10 years removed from his days on an NFL roster, Campbell is in great shape and reminded his team by getting on their level.

In an effort, presumably, to remind his team that he is one of them and that he is not above them, Campbell got on the ground and did up-downs with his team. Not only did he participate in the training camp-opening workout, which is super cool, but he did so with his wrist taped.

Coach Campbell joining the squad for up-downs to kick off #LionsCamp 😤 pic.twitter.com/orxKOoUTjU

Dan Campbell has the wrist tape on for up-downs this AM pic.twitter.com/DICDXMCahX

It’s impossible to dislike Dan Campbell. Whether he can bring a terrible team out of the basement or not is yet to be seen, but it isn’t for a lack of trying.

The Lions’ head coach continues to prove himself to be one that players want to walk into battle alongside and Campbell looks like he could suit-up today and make a few tackles if he had to.