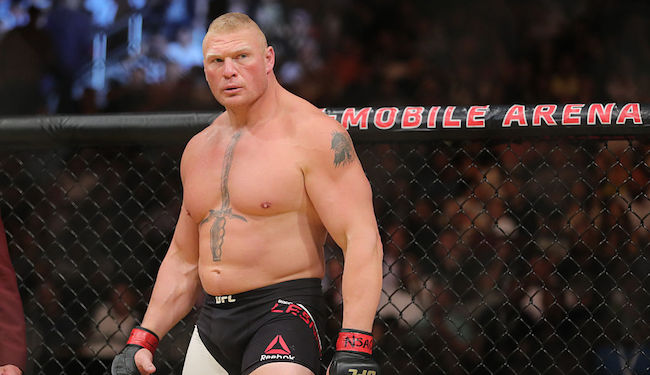 Brock Lesnar’s current contract with the WWE ends after his appearance at Wrestlemania this year in April and it looks like the “Beast Incarnate” might be eyeing a return to the MMA cage.

Last week, Lesnar’s WWE manager Paul Heyman made headlines when said that the door may be open for Lesnar to join the UFC.

While tonight’s WWE elimination chamber PPV was going down UFC president Dana White posted this picture of himself hanging out with Lesnar in Vegas.

MMA Fighting’s Ariel Helwani has a bit more on White and Lesnar hanging out tonight.

Dana White tweeted a picture with Brock Lesnar earlier. Lesnar was wearing a UFC shirt. WWE is in Vegas tonight for a pay-per-view. Lesnar’s WWE contract expires after WrestleMania in April. There is mutual interest, that’s for sure.

Also worth remembering, no one negotiates better than Lesnar. He does this every time and is very open about it. Most recently, he showed up at UFC 184 in the midst of contract talks but re-signed with WWE. Of course, he later did the UFC 200 fight. But the door ain’t shut.

Of course the Internet went in full freak out mode when they say Dana’s tweet.

Dana White and the UFC are in a very vulnerable spot right now and in need of stars as they negotiate their next TV contract, I could see the organization throwing a ton of money at Brock for a few big time fights to boost their ratings/ PPV numbers.

Update: It is worth noting that Brock is still under suspension by USADA and would have to sit out at lease six months after rejoining the testing pool.

More than six months left. His suspension froze after he withdrew from the USADA testing pool. https://t.co/yLwhLFNJ96