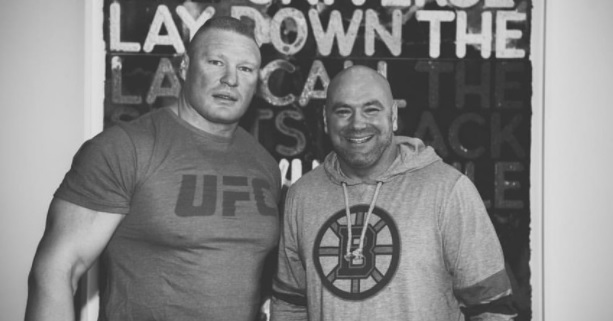 Earlier today, Paul Heyman made headlines when he said that he believed Wrestlemania will be the last time you will see Brock Lesnar wrestling because he’s leaving to the UFC after his contract is up on Sunday.

Q: Do you think [this] Sunday will be one of the last times you walk Brock Lensar to the ring as his advocate, at least for a while?

Heyman: It’s most likely the answer to that is yes. The reasons are rather public. Brock is eyeballing a return to the octagon. He’s made no secret about it. He’s out in Las Vegas at the UFC offices taking a selfie with Dana White wearing a UFC T-shirt. These are not secret negotiations.

The fact that both our contracts are coming due is not a secret, either. Is this the last time that Brock Lesnar goes out to the ring in WWE, I truly don’t know that answer because what we’re focused on at the moment is …

Tonight, UFC President Dana White spoke with UFC Tonight and confirmed that Lesnar was definitely coming to the UFC.

On @UFCtonight, @DanaWhite says that Brock Lesnar is definitely coming back to the UFC.

It’s unclear whether Dana is just trolling and helping Lesnar gain leverage in his contract negotiations with the WWE or is genuinely interested in bringing back the “beast incarnate” to the MMA cage to boost lagging interest in the sport. There’s also the fact that Lesnar is currently suspended for failing drug tests following his fight with Mark Hunt at UFC 200. Lesnar must spend six months in the USADA testing pool before he’s able get back in the cage.