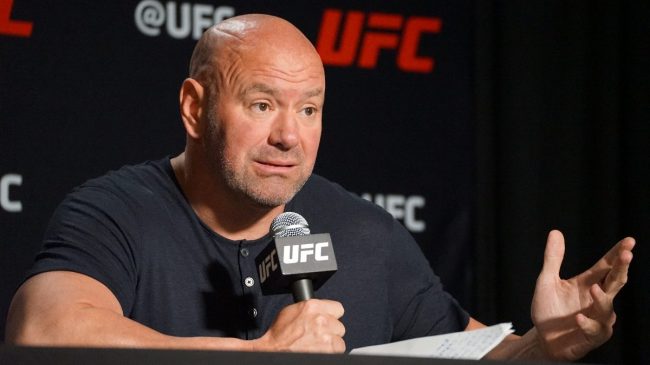 UFC Vegas 61 is right around the corner as the event takes place in the Apex. It should be a solid card, as there is plenty of fighters showcasing their talents. However, rumors have spread that Mark Zuckerberg rented out the entire event, all thanks to Mackenzie Dern. Now, Dana White addresses those rumors.

Speculation began swirling when news broke that UFC Vegas 61 will be a closed event. No media members will be allowed to enter. It’s the first time this has happened since COVID-19 was in full swing back in 2020.

However, according to Bloody Elbow, White made the fights a closed event “because he was doing the media a favor.” The UFC President goes on to say, “We just figured that you guys have been so busy lately, that we give you guys a night off. You guys are here on Tuesdays, you’re here on Saturdays… We need to give you guys a break. You’re welcome.”

Even so, Mackenzie Dern revealed during a press conference that the real reason the Apex is a closed event is that Mark Zuckerberg rented out the arena, per MMA Junkie.

"I know Mark Zuckerberg rented out the whole event."

Mackenzie Dern spills the beans on Saturday's private event at the UFC Apex for #UFCVegas61.

Dana White very quickly shut down those rumors on Twitter.

Mark Zuckerberg did NOT rent out the UFC Apex. That’s total bullshit. https://t.co/VbdFATcltd

There’s no reason for White to lie about who did or didn’t rent out the Apex. So it’s safe to assume that Mark Zuckerberg didn’t rent out the arena for UFC Vegas 61. Either way, Dana White’s organization is still receiving plenty of money by broadcasting the event on ESPN, which means he likely doesn’t mind having a closed-door event for a change.