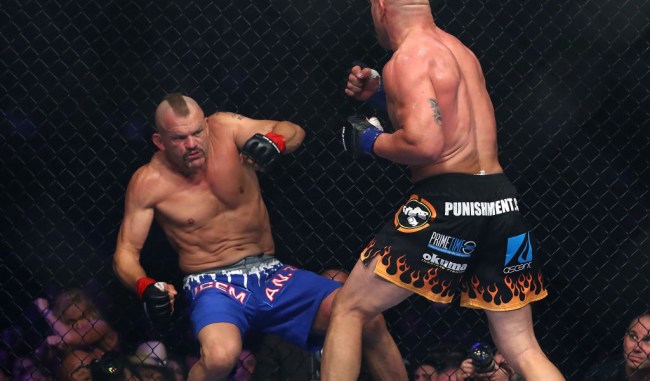 In case you missed it, and be glad that you did, UFC Hall of Famers Chuck Liddell and Tito Ortiz fought for the third time on November 24th for Golden Boy Promotions. It did not end well for Liddell.

You see, there’s a reason that these two fighters are Hall of Famers — because they should both be retired. The second fight in their “trilogy” took place 12 YEARS AGO in 2006.

Liddell is 48-years-old, and has now lost six of his last seven fights, the most recent one before last week’s defeat happening against Ortiz way back in 2010. He was, at one point, 20-3 in his career. He is now 21-9.

Like I said, they should both be retired. Something that UFC President Dana White would agree with as he went scorched earth on Golden Boy Promotions owner Oscar De La Hoya during the UFC Unfiltered podcast on Tuesday.

“Listen, I love Chuck Liddell and I don’t ever want to badmouth Chuck Liddell. People do think I’m badmouthing Chuck Liddell, but the reality is, first of all, lets says this first, I heard last week that the cokehead, ‘Oscar De La Weirdo’ is talking sh*t, that I don’t have any place to tell guys when to retire.

“First of all, it’s called friendship you f***ing cokehead. I’ve been friends with Chuck Liddell for 20 years and the reality is that Chuck Liddell retired when he should have retired. Eight, nine years ago, however long it was.

“And Chuck Liddell is 50-years-old and has no business fighting anymore. The fact that the State of California even let that fight happen is disgusting. Disgusting.

And that wasn’t even close to everything White said, repeatedly calling De La Hoya a cokehead and saying, among other things, “I hope someone talks De La Hoya into fighting again. I hope the state of California makes the fight. And I hope he gets f***ing knocked out just like Chuck Liddell did, in the first round… f***ing cokehead nutball.”

Here’s the complete debacle that was Liddell-Ortiz 3…