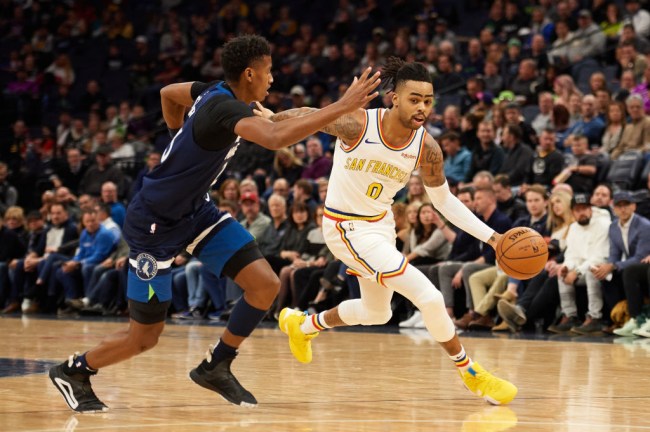 A helicopter is one of the worst possible places to receive bad news. The space is extremely limited and constricting. You can’t walk away from it all. You are stuck there with your thoughts until you land. This was the awkward predicament that Timberwolves executives found themselves in while courting D’Angelo Russell.

The Minnesota Timberwolves enjoyed a promising 2018-2019 campaign and took major strides in becoming a force in the NBA. They had developed their talent and felt if they could get a prime point guard like D’Angelo Russell, they could be contenders. The Twolves brass put on a full-court press to sign Russell in the offseason, which included a helicopter ride over Los Angeles that ended in cringeworthy uncomfortableness.

The Athletics’ Anthony Slater reveals the agonizing sales pitch the Timberwolves execs made to Russell and how it crashed and burned in the blink of an eye.

“The Wolves — with all their power players present, including owner Glen Taylor — took Russell on a helicopter ride over Los Angeles, before delivering him to a private locale for a recruitment presentation they’d been planning the previous month,” Slater reported this week of the Twolves attempt at signing Russell in July.

However, the Timberwolves quickly learned that their fancy helicopter ride was all for naught. “On the helicopter trip back, good vibes in the air, news broke of Russell’s near agreement with the Warriors.” Slater’s source alleged. “Phones buzzed. The mood in the cabin changed. The rest of the date sounded quite uncomfortable.”

It all ended with “an awkward goodbye on the tarmac.” That must have been a quiet helicopter ride back.

Not satisfied with putting the dagger through the hearts of Timberwolves executives, D’Angelo showed Minnesota fans what they could have had. Russell’s greatest game by far this year came on November 11, when he dropped a season-best 52 points and added nine rebounds and three steals in Minnesota. Ruthless.

Another interesting tidbit from Slater’s piece in The Athletic was that another team was ready to spend big money in acquiring Russell’s talents from Brooklyn. The Los Angeles Lakers were serious players in signing D’Angelo, who L.A. originally drafted with the second-overall pick in 2015. The Lakers were ready to offer Russell, who was a restricted free agent, a deal of approximately $100 million. However, they were also in contention for Kawhi Leonard. The Lakers coveted Kawhi more and were willing to wait it out for him.

Russell would agree to a 4-year, $117.3 million max contract with the Brooklyn Nets and then head to the Golden State Warriors in a sign-and-trade that included Kevin Durant.

Speaking of D’Angelo on the Lakers, read how Kobe Bryant taught Russell important lessons in his rookie season with Los Angeles HERE.