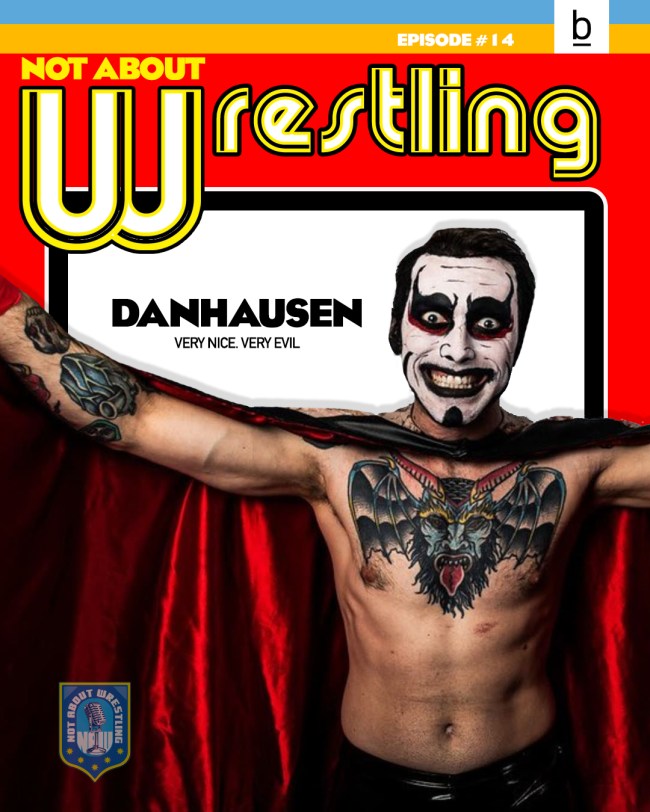 This week on the Not About Wrestling podcast, my guest is Ring of Honor star, Danhausen.

Donovan Danhausen got his start in the Michigan indies, working at a local wrestling school while training. Donovan bounced around to different indie scenes and the character of Danhausen slowly emerged along the way.

Danhausen explained in an interview with Fansided in back 2019 that his character “came from the frustration of trying to please everyone else by trying to be something he’s not.”

“I was sick of just being a guy who wrestles,” he explained. “I didn’t care anymore what people thought of me, I just wanted to make sure I was enjoying what I loved doing again.”

Danhausen pulls inspiration from movies like Texas Chainsaw Massacre 2, the original Batman movie, What We Do In The Shadows, and shows like The Simpsons, and Late Night with Conan O’Brien.

The character was originally more menacing and creepy, but once Donavan started adding dark comedy to the presentation, the character really took off.

He signed with Ring of Honor and has one of the most popular lines of shirts on Pro Wrestling Tees. His shirts were in such high demand, they’re now available at Hot Topic stores around the country.

This interview is unlike any of the others I’ve done. It’s broken into two parts.

In part one, I talk to Danhausen the performer and we cover incredibly important topics like Cheeto’s Mac and Cheese, bowling, Walmart, his favorite curse words, and the best places to buy teeth.

In part two of the interview, I talk to Donovan Danhausen, the creator of the Danhausen about his evolution in both character and makeup, the origins of the character, thinking up new ideas, and where Donovan sees the character going in the next few years.

Ladies and gentleman, entering the podcast, hailing from someplace far away, this is Danhausen.