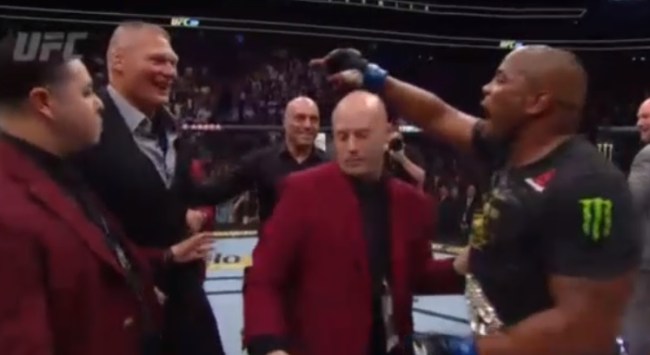 Before tonight’s UFC 226 card, Daniel Cormier made it clear that by beating heavyweight champion Stipe Miocic he would become the greatest fighter of all-time “no cheaters included”.

Daniel Cormier said Friday at UFC 226 weigh-ins that a victory over Stipe Miocic will make him the best fighter in UFC history. That spot, per Cormier, will not belong to Jones, the former UFC light heavyweight champion. “DC” clearly referenced Jones in his speech with Joe Rogan.

Cormier made good on his promise and knocked out Miocic in the first round tonight to become a two division champion.

After the fight Cormier called out former UFC heavyweight champion Brock Lesnar and the two got into a shoving match in the cage.