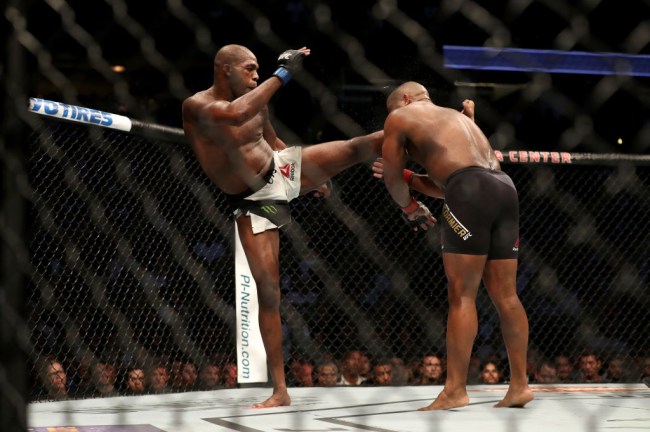 Jon Jones made his triumphant return to the Octagon at UFC 214 at the end of July when he defeated Daniel Cormier with a brutal kick to the head in the third round of their matchup against each other. A disturbing video shot after the fight showed an incredibly dazed (and assuredly concussed) Cormier stumbling around the cage like a drunk baby giraffe— the fighter was clearly in a bad place, and anyone who was in the area should have known he required some immediate medical attention.

He did end up getting some attention, but not the kind that he needed. After his attempts to leave the cage were thwarted, Cormier was subjected to an awkward post-fight interview conducted by Joe Rogan— who had previously pledged to not interview fighters after they’d been knocked out— and was subsequently mocked by a number of people online for crying during the exchange.

If you were one of the people making fun of him: Congratulations! You get to feel like a terrible person! It turns out that Cormier doesn’t remember the interview— or anything else that happened immediately after the fight, for that matter. In a chat with The MMA Hour, he revealed that he blacked out for a full ten minutes following the knockout, saying:

I don’t remember leaving the Octagon. I’m missing probably 10 minutes. I mean, if I can’t remember 10 minutes, I’m pretty sure I had a concussion. I just don’t recall those 10 minutes and I’m not exactly sure that I’m ever going to get that time back.

It’s not exactly a secret that there are some significant downsides to entering a cage and trading blows with another person until one of you stops moving, but it’s still shocking to hear about the toll fights like these can take on the human body.

I’m sure Dana White will use this story to dramatically overhaul current UFC policies and oh who are we kidding he’s not going to change anything.