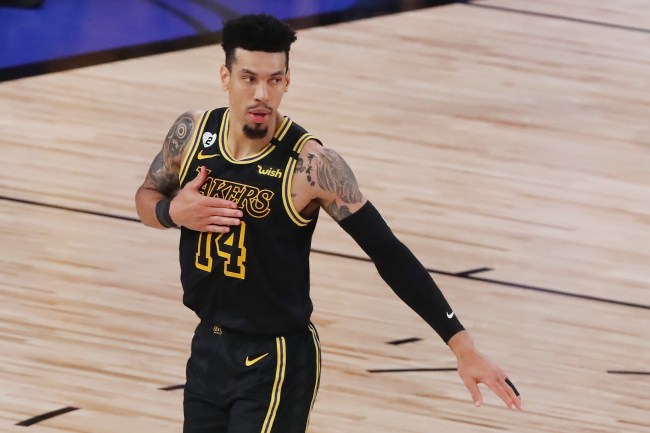 Lakers Danny Green has responded to Lakers fans who were angry about his play in Game 5 of the NBA finals.

On Friday, Green missed a wide-open three-pointer that could have clinched the championship for the Lakers.

Apparently Lakers fans began sending death threats to Green and his Fiancée on social media because of the missed shot.

Danny Green said that has spoken to his fiancée about the death threats she has received on social media directed at her and him since Game 5. … And I feel kind of silly sharing this news on a social media platform. Get a grip, people.

Before Sunday’s game 6, Green spoke to the media and talked about the missed shot. He also addressed fans who were sending his Fiancée death threats.

Lakers' Danny Green on that shot he missed at the end of Game 5: "I had more time than I realized, should have taken more time…I'd give anything to get that shot back again, trust me." Still, he adds "any person that plays basketball knows it's never only on one play." pic.twitter.com/t1NC4dwA9J

Danny Green said his fiancee received death threats: "I got so many messages, I can't even hit delete all button… I had to ask, are you getting death threats? She's like yeah… It's a game. Fans are emotional… I hope they are that passionate about voting or injustice."

Danny Green on the fans who've made death threats against him & his fiancé after his missed shot: "I hope they're that passionate about voting, or injustice for these people who deserve justice – we'll get some better change in the country." Green calls himself "an easy target." pic.twitter.com/F68MgZnpNx