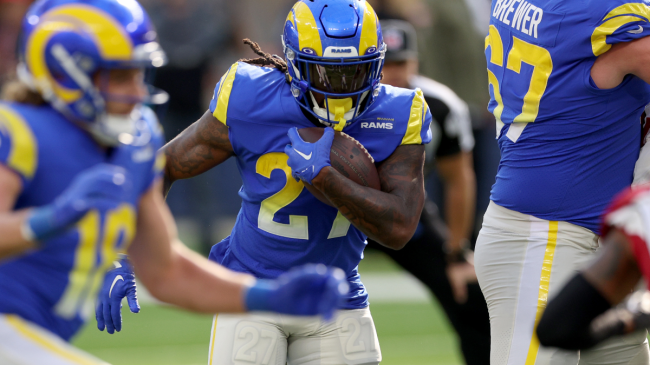 Rams running back Darrell Henderson was released on Tuesday after spending four seasons with the team.

The rusher had been one of the top option’s out of the backfield, recording seven starts in 2022. He tallied 40 yards on double digit carries four different times this year and averaged four yards per carry while also hauling in 17 catches from his tailback position.

Still, the team decided to go in another direction with the rushing attack, opting to keep Cam Akers instead. Henderson didn’t seem to torn up about that fact.

Shortly after the news of his release broke, Darrell Henderson posted a message on Twitter.

His response makes it seem as if he’s elated to be leaving the Rams, and maybe he is. Los Angeles currently sits in last place in the NFC West at just 3-7 on the year. This coming after taking home a Super Bowl title last season.

And given Henderson’s steady production over the last few years, he’ll surely be picked up on another roster. That team could turn out to be a playoff contender looking to add one more weapon to the offense.

Many on social media were quick to chime in upon seeing Henderson’s surprising reaction. See what they said on Twitter.

One fan wrote, “Bro is celebrating leaving the Rams,” while another commented, “Darrell Henderson doesn’t seem too bummed out about being released.” Many others shared that sentiment.

Darrell Henderson doesn’t seem too broken up about leaving the L.A. Rams… 👀 https://t.co/bG0mMlHh93

It shouldn’t take too long for Henderson to find a new home, and based on his response, that’s exactly what he wanted. We’ll see if he has an opportunity to make another Super Bowl run with a new suitor as the 2022 season continues.