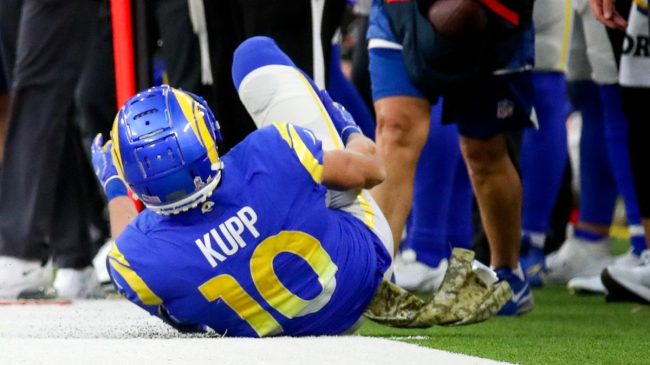 The Los Angeles Rams have been majorly disappointing this season as the defending champs don’t look like contenders at all. Now, things are going from bad to worse after Cooper Kupp fell to injury. The franchise made a big decision regarding their star wide receiver and the fans aren’t taking the news well at all.

According to Adam Schefter, “Cooper Kupp is scheduled to undergo ankle surgery Wednesday and the team is placing him on IR.” Many believe the Rams’ season is done for now that their superstar wide receiver is ruled out for a minimum of four games.

Rams’ WR Cooper Kupp is scheduled to undergo ankle surgery Wednesday and the team is placing him on IR, per HC Sean McVay. Kupp is out a minimum of four weeks and with the way the Rams season is going, could be longer.

The good news is, that Sean McVay believes there’s a chance Kupp comes back within the four-week mark. However, it’s completely up in the air right now. Additionally, based on how the Rams’ season is playing out, rushing Cooper Kupp back from injury might not be the best decision. As you can see, the fans are pretty much melting down right now.

Sean McVay in the locker room after hearing the news about Cooper Kupp: pic.twitter.com/Pw2YpeqzuO

It’s not looking great for Los Angeles right now. That’s for sure.

Yeah I’m not okay! Season was already bad now WR1 is out 😕😫 pic.twitter.com/45IyPvKsoP

We’ll see if the Rams can find a way to bounce back without their superstar wide receiver. It’s hard to imagine LA has a fighting chance right now, but the NFL is a wild place.