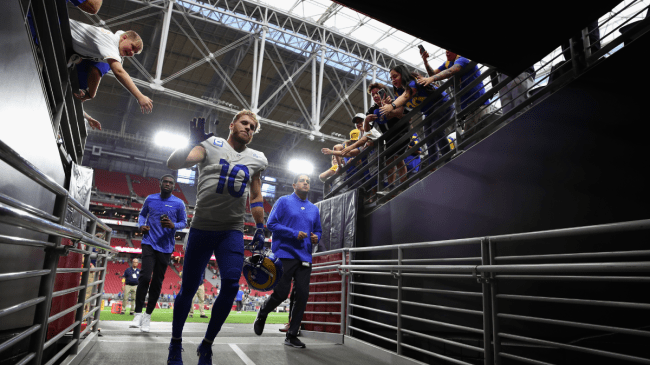 Things have not gone according to plan for the Los Angeles Rams in 2022. Fresh off a Super Bowl title a year prior, the team limped out to a 3-5 start. That quickly turned into 3-6 after a 27-17 drubbing at the hands of division rival Arizona on Sunday.

Los Angeles was behind the eight ball from the start in this contest with the Cardinals, seeing starting quarterback Matt Stafford sidelined as he deals with a concussion. Stafford’s absence, along with the removal of Kyler Murray from the Arizona lineup, set fans up for a rather uninspiring quarterback battle between John Wolford and Colt McCoy.

The lack of star power, particularly on the side of Wolford and the Rams, showed through. LA fell behind 17-3 in the first half, eventually losing by 10 points. A late touchdown in garbage time made the score look a bit more respectable than it actually was.

But the defeat on the scoreboard might not have been the biggest loss of the Rams’ day.

Wolford overthrew his target on a late pass, causing Cooper Kupp to leap for an attempted catch. The wideout landed awkwardly, immediately grabbing for his lower leg after falling to the ground.

He’d eventually be helped to the sidelines, exiting the game for good. Kupp was seen grimacing on the bench shortly after the injury.

Many blamed Wolford’s errant throw for the injury as things continue to go downhill in Los Angeles.

Cooper Kupp is the team’s leading receiver, and one of the game’s most potent pass catching threats. Last year, he hauled in a league-leading 145 receptions for 1,947 yards and 16 scores.

This year, it’s been more of the same as he’s tallied over 800 yards through eight games.

Losing Kupp for any extended period of time would be a brutal blow for a Rams team that’s now fallen into last place in the NFC West. At 3-6, any hopes of defending that Super Bowl crown are dwindling.