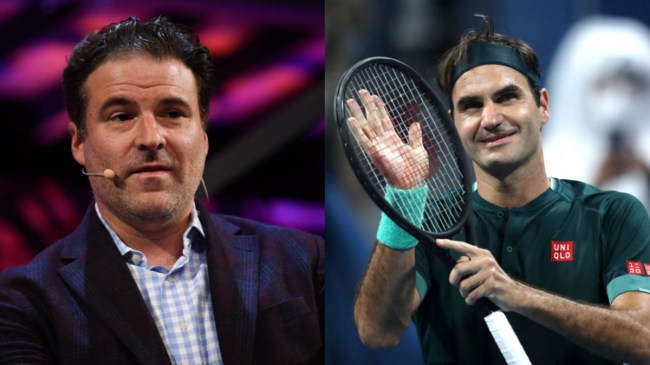 What’s so fascinating to me about Darren Rovell is that he’s essentially the cliche movie nerd come to life. Like, when growing up in the suburbs of New York City, I never actually saw any classmates get a swirlie or get shoved into a locker, and yet in movies and TV shows, it happened all the time. But for some reason, Rovell — seemingly every time he opens his mouth — comes across as someone with a bevy of experience in being picked on in cartoonish ways: wedgies, flaming dog turds on his doorstep, etc.

Take his tribute to tennis icon Roger Federer, who officially announced his retirement on Thursday at the age of 41 years old. It’s difficult to think of anyone on Earth, let alone in sports media, who has the unique ability to make what should be a status-quo “You were awesome, thanks for everything” tweet and make it so inherently… weird.

“What I will most remember about Roger Federer: How effortless he made it all look.The movement of his body. The flow of his strokes. All while, seemingly, not ever sweating!” Rovell tweeted shortly after Federer’s announcement.

What I will most remember about Roger Federer:

How effortless he made it all look.

The movement of his body.

The flow of his strokes.

All while, seemingly, not ever sweating! pic.twitter.com/ZsZHzF5DFQ

Naturally, given the phrasing “the movement of his body” and “the flow of his strokes”, sports fans were quick to get on Rovell’s back for, once again, making things weirder than they needed to be.

roger federer, the most passionate of lovers. https://t.co/hSRmNr40hX

Pause of the week https://t.co/mgvJ3GZyFp

I too will miss the flow of his strokes. Well said https://t.co/bJ3iFg7UrD

The flow of his strokes https://t.co/VKQ1CyY1NU

I’ll definitely miss the flow of his strokes too, Darren https://t.co/tvusDjrGYF

Darren only tweeted this with one hand https://t.co/OYfgt1IuDD

Despite how goofy Rovell is, I truly hope he never changes, as the times he sticks his foot in his mouth are one of the few internet events that seem to unite us all.

RELATED: Roger Federer Announces His Retirement From Tennis And When His Final Match Will Be