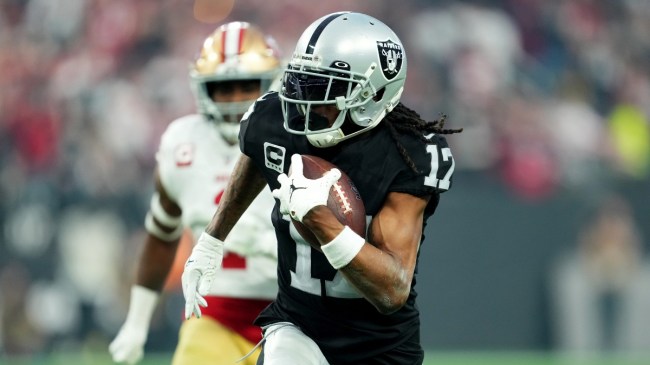 When news first broke that the Las Vegas Raiders were benching Derek Carr, Davante Adams wasn’t too happy about it. However, since then, he’s starting to hum a different tune.

With the offseason on the horizon, Adams has finally made his future with the franchise clear.

According to Grant Gordon, a writer for the NFL, Davante Adams plans to remain in Las Vegas even though Derek Carr was benched. The superstar wide receiver admits Carr was one of the reasons he signed with the Raiders, to begin with. Even so, Adams isn’t letting Carr’s eventual departure change his mind about playing Vegas.

“I wouldn’t have been here or ended up here, originally, probably if Derek wasn’t here. But that doesn’t necessarily mean that I won’t be here in the event that he’s not here.”

Davante Adams apparently grew up as a Raiders fan. So, whether Carr is under center or not, the star wide receiver plans to stick with Las Vegas moving forward, per Gordon. “But my dream was to play for this team before he was a Raider, obviously, and at this point I want to try to make this thing work and continue on doing what I’m doing here, myself get better and obviously see the team grow and get better as well.”

The future of this team is a bit murky with Derek Carr on the move. They have a solid roster overall though, making the Raiders an enticing option for any quarterback.

Davante Adams also makes it clear that he wants to help the organization find its new quarterback in the offseason. This makes tremendous sense, as Adams is easily one of the best wide receivers in the game.

Adams goes on to say, “me, Josh, [general manager Dave Ziegler], we’ve all got a really good dynamic and it’s something that I really appreciate, and I’ve mentioned it to them as well. They don’t have to do anything — I’m not a part of the front office — but obviously, they know the reason why I came here. And a step like this is something that means a lot to me and my personal career and obviously what I’m trying to chase as far as the ultimate pursuit, to get that ring.”

It should be an interesting offseason for the Raiders. Look for them to consider all options at quarterback in the offseason.