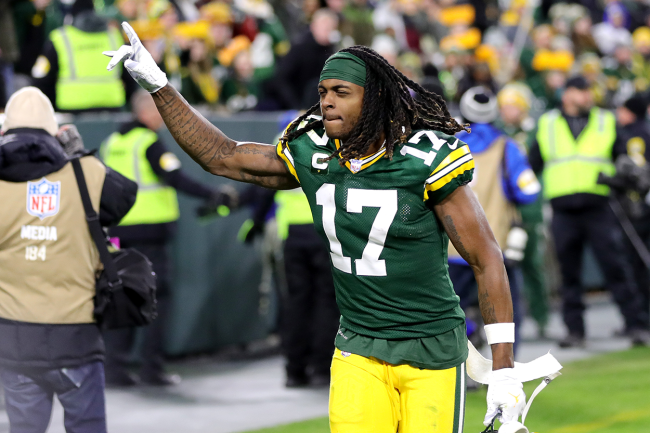 Davante Adams is still holding a grudge against Odell Beckham Jr. over his free agency decision. Beckham, who was released by the Cleveland Browns on Nov. 5, had his pick of the litter in terms of his next team.

Reports surfaced regarding a few teams, including the Seahawks and the Saints, but one organization continuously stood out— the Packers. By the time that Beckham cleared waivers, the general consensus was that he was set to join Aaron Rodgers and Adams in Green Bay.

And then Beckham called an audible and signed with Los Angeles.

The Rams played the Packers for the first time since Beckham’s decision on Sunday. Prior to the game, Beckham reached out to Adams about a jersey swap.

Adams shut him down in cold-blooded fashion.

“We did talk two days ago, he said he needed a jersey after the game. I told him ‘go get a Cooper Kupp jersey’ since that’s obviously his guy and that’s who he wanted to be with,” Adams told Michael Irvin in a recent interview.

He then went on to explain that he wishes Beckham well and would rather have had him on the Packers.

“That’s my guy, man,” Adams said. “I love Odell. I think he would’ve been a great fit here but I wish nothing but the best for him.”

Regardless of the fact that they are friends, or at least friendly, Adams denied him in the most ruthless fashion possible. Savage.