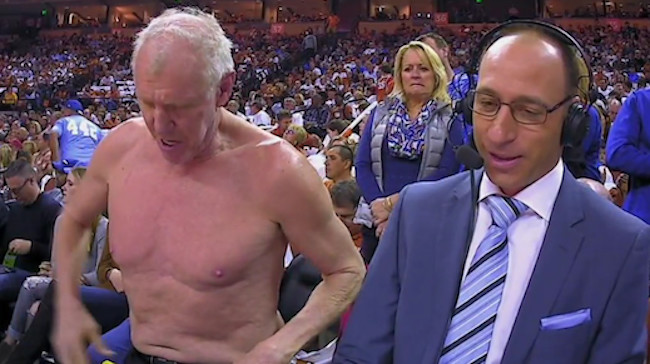 On the surface, Bill Walton and his Pac-12 broadcasting partner of six years Dave Pasch go together like orange juice and toothpaste. Like Lena Dunham and a bachelor party. Like myself and good, forward-thinking decisions. And Pasch knew this before the two were paired together–he at first resisted the pairing and claimed he felt and still feels supremely awkward at times during broadcasts when Walton goes off an an unhinged tangent about art, music, volcanoes, what have you.

Each game I do with Bill Walton ages me in dog years. After this week's PAC 12 tournament, I'll be 376.

But the 65-year-old Dead Head doesn’t go on his rants for theater, as evidenced by a text Pasch recently received from Walton, which Pasch tweeted below:

Just so you don’t think he only asks these questions on air. pic.twitter.com/pasknD0xZo

Lets take a take a short trip down Walton Way.

Walton gets deep with Doris Burke.

Doris Burke: “any thoughts about this game”
Bill Walton: pic.twitter.com/3fhYGfcYfn

“I’ve never lost more faith in humanity than that moment.” — Bill Walton talking about losing the ESPN Celebrity Game as a coach.

This is Bill Walton’s world. We’re just living in it.