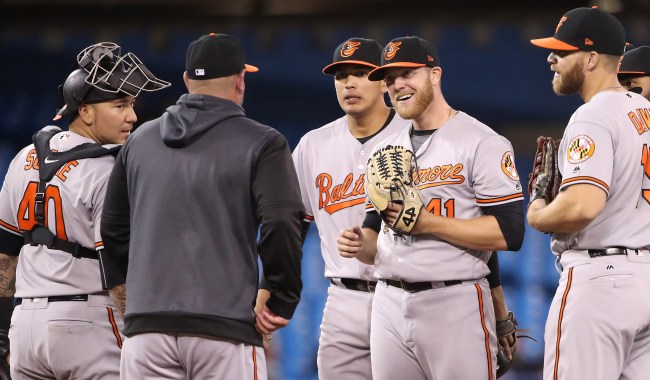 Monday night, Baltimore Orioles pitcher David Hess was absolutely cruising in his outing against the Toronto Blue Jays. Through 6-1/3 innings, Hess was up 6-0, had faced just one batter over the minimum, struck out 8 batters and walked one on just 82 pitches, and best of all he had a freaking no-hitter going.

That’s when the Orioles rookie manager Brandon Hyde paid Hyde a visit on the mound.

And took him out of the game.

.@hess_express28 was absolutely STUNNED when Brandon Hyde pulled him from the game with a no-hitter in tact. 😱#ChangeUp pic.twitter.com/nXtQNl86zC

Naturally, as soon as Hyde was gone from the game the Orioles proceeded to allow two runs to score, and three more in the eighth and ninth innings, and barely eeked out a 6-5 win.

“I was shocked because I knew my pitch count was decently low,” said Hess following the game, reported the AP.

When asked why he made the unpopular decision to pull Hess, Hyde said he had planned to pull him earlier, but left in him because of the no-hit bid, “For David to go beyond that (pitch count) obviously and then some, was incredible. But that was a terrible walk. I hated to do it, but for David’s health and one of, hopefully, 30-plus starts, it was the right thing to do.”

#Orioles manager Brandon Hyde and starter @hess_express28 explain the decision to take out Hess with a no-hitter intact. pic.twitter.com/oFWntPVGGA

The fact that Hess had also just pitched two innings of relief on March 28th versus the Yankees also played into Hyde’s decision.

So, while no one liked Hyde pulling Hess with a no-hitter going, it wasn’t completely idiotic. It just sucked and didn’t make anyone happy.

Toronto fans are booing Brandon Hyde for pulling David Hess with a no hitter with one out in the bottom of the 7th inning. pic.twitter.com/VzdRyb77WK

I’m sure Brandon Hyde will offer a logical reason for pulling David Hess. He probably had real-time info that indicated fatigue. The reasoning will likely be sound. But no-hit bids are entertaining, and isn’t entertainment the whole point of this enterprise?

Brandon Hyde with his first questionable move of the season. He lifts David Hess in the 7th WITH A HO-HITTER. Who does that? Note: reliever
Pedro Araujo promptly gave up a 2 run homer. I dunno, you tell me..

Brandon Hyde, you don't do that. Come on. That is horrible. 7 run lead you let Hess keep working the no hitter. We see you @hess_express28. You are always super classy so we'll say it for you: Bush league by the rookie skipper. He'll regret that decisio

Brandon Hyde yanking Hess during a no-hitter (for a pitcher who then serves up a two-run home run) just gave everyone a mini-masterclass on how to lose a clubhouse. #Orioles

David Hess is trying to talk Brandon Hyde out of yanking him, but to no avail.

Brandon Hyde blowing it already! Taking a guy out who is pitching a no-hitter that seriously might improve the psyche of the young @Orioles team? Pathetic.

What the hell was O's manager Brandon Hyde thinking when he pulled pitcher David Hess out of the game in the 7th inning last night?!! He had a no-hitter and was only on 82 pitches?! What a horrible call. #Orioles

I re-downloaded Twitter just to express how disgusted I am that Brandon Hyde took David Hess out in the middle of a no-hitter.

Brandon Hyde watching the 9th inning after pulling Hess with a no hitter #Orioles pic.twitter.com/fM5TDCy9cu