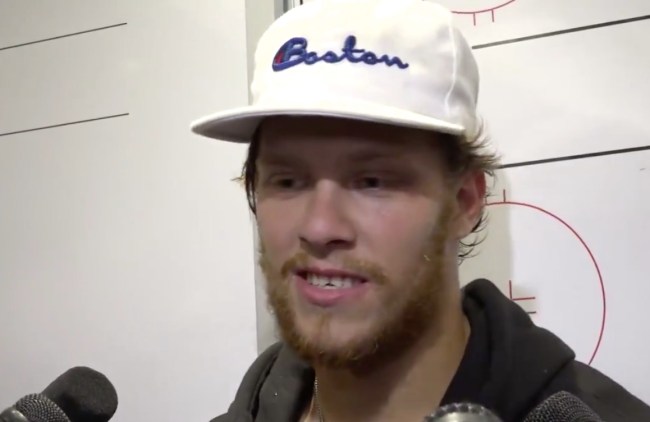 Boston Bruins forward David Pastrnak is now a very wealthy man. The 21-year-old signed a 6-year contract extension worth $40 MILLION that keeps him with the team until 2023. David Pastrnak has only been in the NHL for three years but he put up 70 points last season (34 Goals, 36 Assists) which was more points than he had in his first two seasons combined (27 and 26pts respectively).

The Boston Bruins, David Pastrnak, and fans spent the entire offseason hoping to lock up this future All-Star for a long-term deal as he’ll factor heavily into the future success of this venerable NHL organization. The two sides came to an agreement last Thursday and the 21-year-old is now a multi-millionaire.

When reporters caught up with the 21-year-old Czech Republic native to ask him how he celebrated signing the contract worth $40 million his response has everyone laughing. It seems as if this young NHL star is going to need some coaching on how to spend his riches:

So, @pastrnak96, what's the first big thing you're going to buy?

"Nothing, I got dinner yesterday for $8…rice and chicken teriyaki." 😂 pic.twitter.com/a2ydNRRP0j

I tip my cap to him. I can’t remember the last time I had an $8 dinner that didn’t involve me cooking at home. Maybe he’s got it all figured out and is planning on investing every last penny of his earnings so that he can retire early. Or perhaps David Pastrnak is one of those people who just doesn’t give a shit about food beyond its nutritional value.