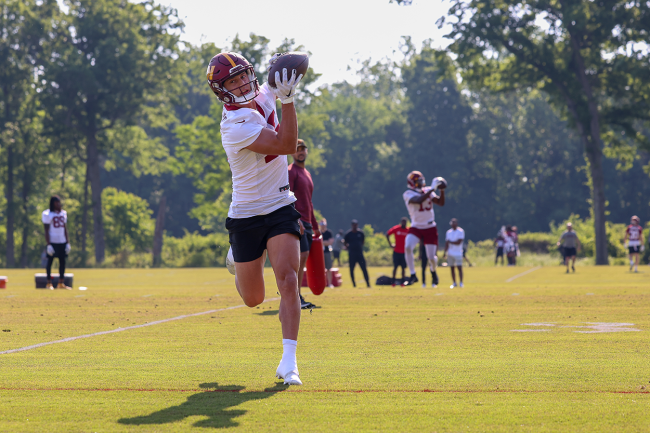 Nobody showed up to Day 2 of Washington Commanders training camp on Thursday, but that was not the case on Friday. The turnout was significantly better for Day 3, although it was still underwhelming.

The fan turnout for the start of day 3 of Commanders camp. pic.twitter.com/nfl94Um9y6

Even though Commanders fans may not have showed out by the busload, they were on-point with their chirps.

Not long before training camp began, back-end depth chart wide receiver and former seventh-round pick Dax Milne went Instagram official with his new girlfriend. Milne, who was Zach Wilson’s best friend at BYU, posted a picture with the girl— who just so happened to be his best friend’s ex-girlfriend.

As a result of the relationship hard launch, Wilson’s ex-girlfriend and Milne’s current girlfriend was called a ‘Homie Hopper’ in the comments. In response, she accused Wilson of sleeping with his mom’s best friend before deleting her Instagram profile.

There has been a lot of fallout since the accusation was made and Wilson had an incredible response to the rumor. Whether it is true or not, the allegations have been widely accepted by NFL fans as fact. In turn, Wilson is being heralded as a legend and interest in his jersey has skyrocketed.

On the flip side, there has been very little made of Milne’s role in the situation. Until Friday, that is.

During Day 3 of Commanders camp, Milne caught a pass in front of fans and received his first known chirp about what went down during the offseason.

Dax Milne just caught a pass along the sideline and some fans yelled, “Mr Steal Your Girl!”

Of course, Washington fans are going to have their receiver’s back, so it was all in good fun. Now all we need is for the Commanders to send Milne to the podium to speak to the media. It would be a terrible idea for the team, but think of the content!