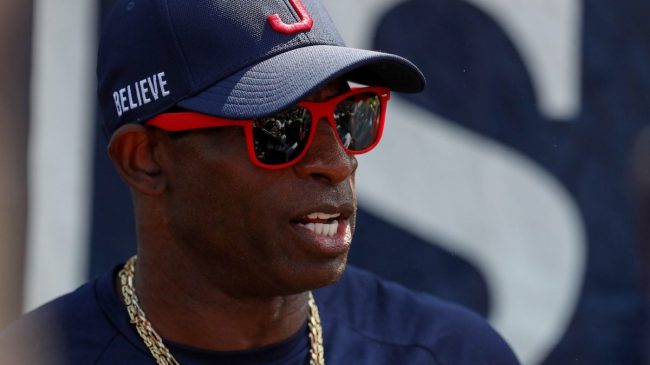 Since becoming the head coach for the Jackson State Tigers, Deion Sanders has made headway as a head coach. He’s proven to be an elite recruiter, reeling in top talent to an HBCU program. Additionally, Sanders’ teams have been beating down the competition by a wide margin. For that reason, he’s rumored to have garnered interest from an ACC school.

However, it sounds like the Jackson State head coach is calling out college football’s double standards in regard to HBCU programs.

According to Sports Illustrated, Sanders isn’t pleased with the “double standards” he sees in college football. Despite being grateful for the ACC rumors, Deion Sanders doesn’t seem too happy about the fact he’s receiving all of the attention.

During an appearance on The Rich Eisen Show, Sanders claims, “It’s nice to be mentioned… So you’re saying a guy can come from HBCUs and coach at a higher level, but a quarterback shouldn’t be considered at the next level. I don’t know how that works.”

The quarterback at Jackson State is nonother than Shedeur Sanders, the son of Deion Sanders. Shedeur has played out of his mind so far this season, which makes sense why his father is criticizing college football right now. The Tigers head coach continues by stating, “…If I were to go to the next level, you don’t think the quarterback is going to the next level? … What I’m saying is that it is just funny you say I’m good enough and my name is being tossed and hit around like a fastball to [Aaron] Judge. I like that, though. I like that thought process.”

Deion Sanders wants everyone to know that his son is more than capable of playing at a bigger program, per Sports Illustrated. “Forget that he’s my son and his last name is Sanders; any other man doing what he’s doing and accomplishing what he’s accomplishing, this far, this early on, deserves the recognition.”

So far, Deion Sanders has done a phenomenal job at getting HBCU sports more on the map. Perhaps he’ll end up taking a head coaching job at a bigger school, as the rumors suggest. However, his criticisms of college football are valid.