Deion Sanders Blasts Media, Says His Son, Shedeur, Is Being Disrespected As A Heisman Candidate 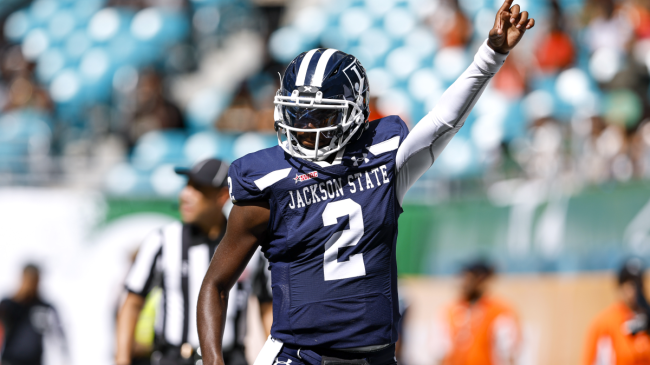 Deion Sanders has never been one to hold back on the media when he believes his program is being disrespected. He’s also one of the top supporters in his players at Jackson State.

Maybe none more so than his sons. One of Primetime’s kids, Shedeur, plays quarterback for the Tigers, and Coach Prime doesn’t think he’s getting enough respect in comparison to other top players in college football.

Through four games in the 2022 season, Shedeur Sanders has thrown for 1,381 yards and 14 touchdowns while completing more than 75% of his passes. He’s added 51 yards on the ground and another pair of scores, leading his team to four straight wins.

Yet, due to Jackson State’s status as an FCS program, you won’t hear Shedeur’s name mentioned in any Heisman talks. Deion is taking offense to that.

Coach Sanders went on the record saying he believes his quarterback needs to be mentioned in the Heisman conversation.

“You put his [Shedeur] numbers up next to the guys in Power 5s, he’s doing as much or more than they’re doing right now… They didn’t mention what Shedeur is doing. Forget that he’s my son and his last name is Sanders; any other man doing what he’s doing and accomplishing what he’s accomplishing, this far, this early on, deserves the recognition.

Now, while we haven’t seen an FCS player win the award since the divisions split back in 1955, there have been players to garner interest. Most notably, Steve McNair finished 3rd on the Heisman ballot during his playing days at Alcorn State before moving on to a lengthy NFL career.

So, it’s not unheard of to see an FCS star like Shedeur Sanders get some Heisman attention. If Deion has his way, the recognition will soon be on the way.