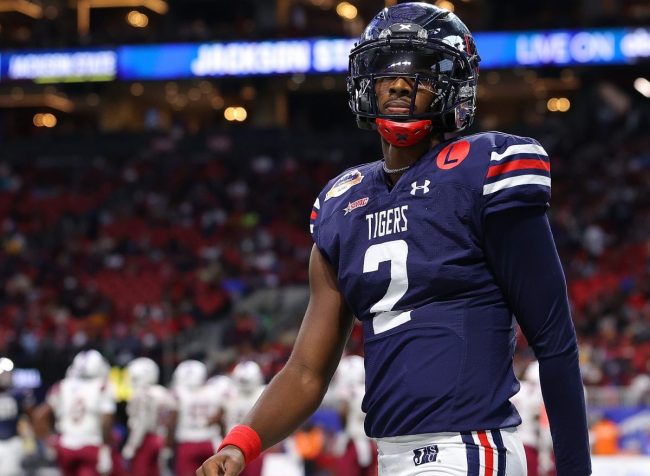 The Jackson State football team got off to quite the start this season with an emphatic 59-3 beatdown of Florida A&M on Sunday. This is the same FAMU team that hung with North Carolina for three quarters.

One of the key reasons behind the blowout win was quarterback Shedeur Sanders. The signal caller completed 29 of 33 passes for 323 yards and five scores. He reeled off a string of 17 straight completions to start the game, getting his team up big early.

With the game well out of hand late in action, Sanders took to the sidelines, coming out of the game in order to give some backup players a little playing time.

Sanders was interviewed while on the bench, and it couldn’t have come at a better time.

As the reporter asks a question, Jackson State scores another touchdown to put an exclamation mark on the impressive victory. Take a listen.

Sanders: "Look we just scored again, this aint nothing" 😂 pic.twitter.com/pMCY4He3VX

“You’ve got to understand, we just don’t say ‘we’re going to dominate’ just to say it. That’s not just something that’s written on the wall. We mean it, we live by it every day. That’s what’s preached in the locker room and that’s what we stand for. This was a big, big, big opportunity.”

Then, the Tigers blocked a punt which they took to the house for a touchdown.

“Look, we just scored again. This ain’t nothing. We chose to come to this spot.”

Absolutely brutal for FAMU, but it couldn’t have come at a better time. Jackson State will hope to build upon this win as they look to bring home a championship in 2022.