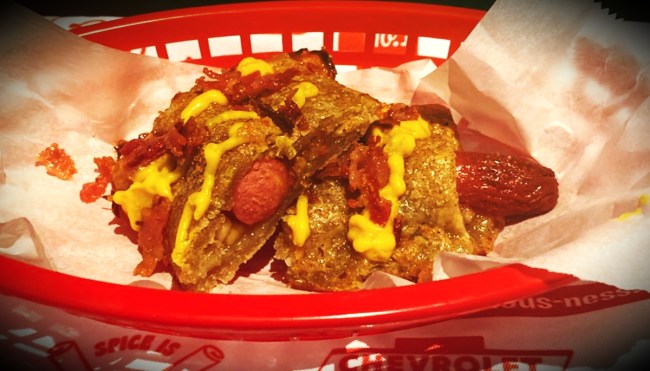 On Thursday night, baseball fans gathered in Iowa for the “Field of Dreams” Game will also get to experience something arguably even more historic in the form of the apple pie hot dog spawned from the beautifully twisted mind of Guy Fieri.

If you’re not one of the 8,000 or so people making the trek to a cornfield in the middle of Iowa to watch the Yankees and the White Sox face off while draped in some old school duds, you might be kicking yourself for missing out on the chance to get a taste of this flaky, meat-filled culinary embodiment of America. Thankfully, that’s not your only option, and if you’re looking for an alternative, you’ve come to the right place.

Fieri’s newest creation was created with the help of Chevrolet, which was kind enough to send a care package my way that contained all of the required ingredients to engineer an apple pie hot dog from the comfort of my kitchen—and after getting to taste it for myself, I can safely say you’re missing out if you don’t do the same.

As the owner of multiple Guy Fieri cookbooks and someone who’s made the pilgrimage to one of his fine dining establishments, I can’t say I’ve really ever been disappointed by any of the Mayor of Flavortown’s brainchildren. However, I was still a bit worried the chef had gone Full Doctor Frankenstein with his apple pie hot dog because, well, it’s an apple pie hot dog.

Thankfully, I can safely say Guy absolutely crushed this. By all accounts, a hot dog encased in a sugar-covered pie crust containing a sweet apple filling shouldn’t even be palatable. As a result, I fully anticipated I’d take a single bite just to say I tried it before moving on with my life as opposed to what actually happened: I housed the entire thing in an unhealthy amount of time while my dog stared intently at me while repeatedly licking her lips, an all-time Fat Kid Moment I’d feel a bit ashamed of if the apple pie hot dog wasn’t so damn good.

So, I highly recommend you give it a shot—and here’s how you can do exactly that. 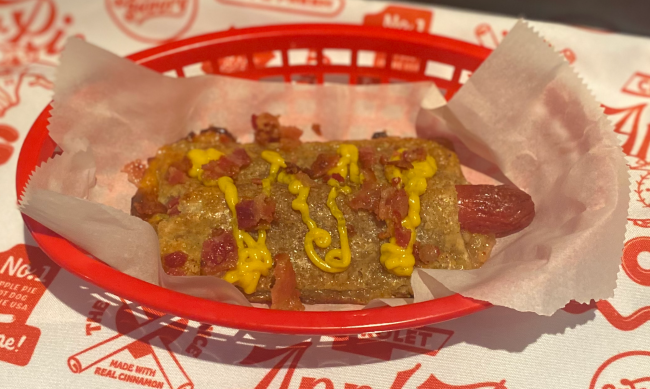 To kick things off, here’s what you’re going to need:

While you can buy most of the aforementioned ingredients premade, you can make the Apple Mustard yourself by combining equal parts yellow mustard and apple pie filling. There are also plenty of recipes for bacon jam online, but here’s what Guy recommends:

To make it, render the bacon in a pan on medium heat and pour out the fat once it’s cooked. Add the remaining ingredients and simmer until it reduces to a syrup that coats the bacon. Remove from the stove and allow to cool.

Once you’ve got all your ingredients together, it’s time to get cooking. If you’re not a fan of the whole “reading” thing, we threw together a step-by-step guide on TikTok, but you can keep scrolling for a more in-depth set of instructions. 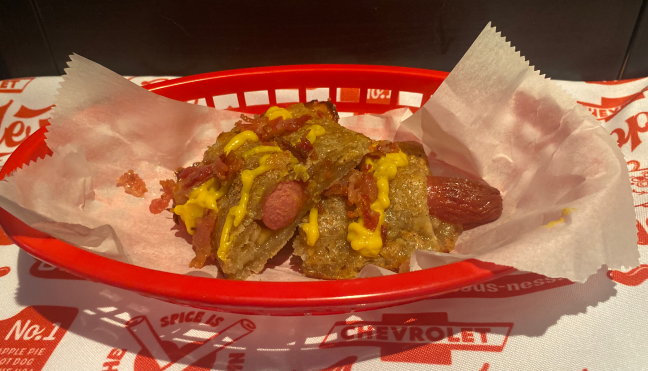