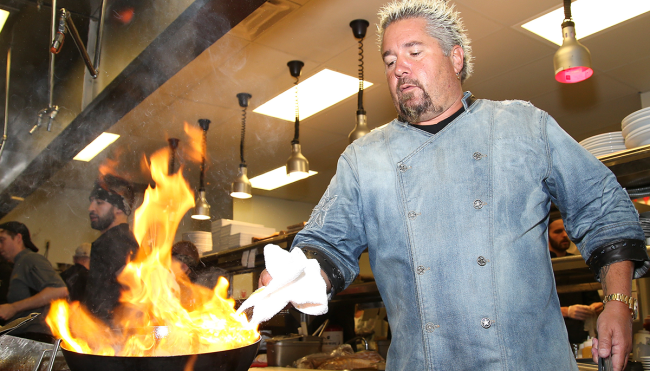 When the ball dropped in Times Square on December 31, 2017, it marked both the start of a new year and the end of an era. The people who dropped $799 to get the V.I.P. treatment at Guy’s American Kitchen & Bar on that fateful night had also secured a ticket to the restaurant’s Last Supper, as it closed its doors the following day a little over five years after it was the subject of the infamously vicious takedown that would’ve made the critic in Ratatouille envious of the New York Times reviewer who wrote it.

Guy Fieri opened that particular outpost in 2012 during a time when he was still the culinary world’s favorite punching bag. The chef was an easy target thanks to his populist approach to cooking and his preference to serve up dishes that served as the antithesis of fine dining, but his detractors also gleefully took aim at his flamboyant personality and the equally colorful aesthetic reflected in his food.

We’ve come a long way over the past decade or so, as it’s hard to think of anyone the general public has changed its tune on more dramatically than Guy Fieri. Sure, he might still give off a “Dad Who Wears Yellow Oakleys Whenever He Drives The Car He Restored After Suffering A Midlife Crisis” vibes, but as Shane Torres outlined in a fantastic set on Conan, he seems like a pretty good dude who’s just living his life how he wants to.

A few years ago, I realized my once ironic love of Guy Fieri had transformed into a genuine one. After all, how can you not be a fan of a dude who accidentally got his hair bleached and decided to just roll with it for the rest of his life and routinely gone out of his way to whip up meals for first responders fighting fires in California?

When the hospitality industry was crippled by the pandemic last year, Good Guy Fieri quickly jumped into action. He immediately started a fund to provide $500 grants to bar and restaurant workers who had their livelihoods impacted and has managed to raise over $25 million since kicking off the project.

Over the past year, the question on basically everyone’s mind has been “When are things going to get back to normal?” There’s no way of knowing when that will be the case, but thanks to Guy Fieri, I was able to get a taste of the pre-COVID past (and what I can only hope is the post-COVID future) by leaving the real world behind for a couple of hours and taking a trip to Flavortown.

As a proud member of #ModernaGang, I’ve been slowly easing back into the many aspects of life I’ve been deprived of over the past year. That includes the various excursions I’ve gone on to get the hell out of New York City after being largely confined there since last March, and during my most recent trip, I found myself in Connecticut with some time to kill.

Thanks to a combination of a lack of both skill and self-control, I’m not a huge Casino Guy. However, I am a huge Guy Fieri In A Casino Guy guy, which is why I decided to head to Foxwoods to make a pilgrimage to Guy Fieri’s Kitchen & Bar. 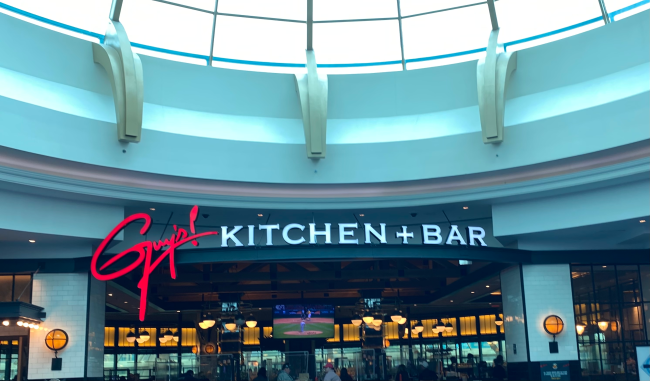 While Guy’s Kitchen & Bar features the masks and protective barriers that have become par for the course by now, I couldn’t help but feel like a slight weight was lifted when I sat down at a booth for a meal for the first time in ages. The decor was decidedly understated compared to the Ed Hardy-themed restaurant I had been anticipating, but in a way, the subdued nature of the dim lights and exposed beams was an ideal environment to make my grand return; one with an air of familiarity as opposed to one that subjects you to sensory overload. 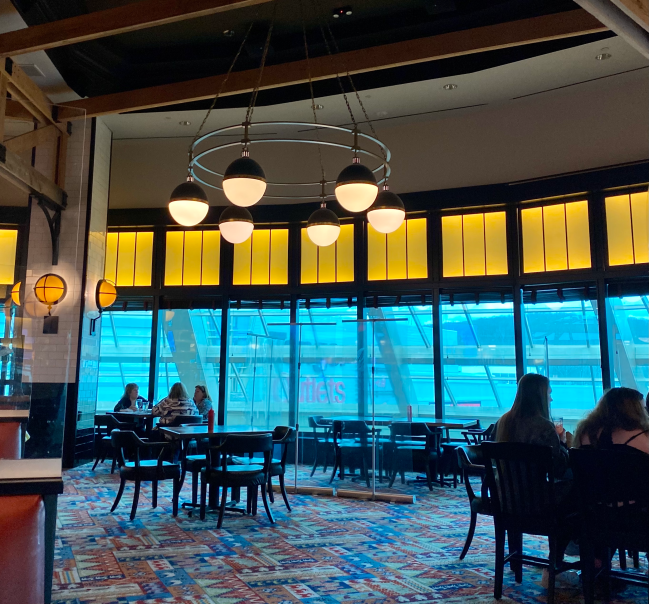 I immediately turned my attention to a cocktail menu populated by drinks with names like “Guido’s Freaky Tiki” and “Candy Apple Sangria.” However, my eyes were immediately drawn to the “Santorita,” a mezcal-and-vodka-based concoction mixed with passion fruit, lime, and tropical Red Bull.

I’m a simple man; when I see a cocktail with Red Bull while eating at Guy Fieri’s restaurant, I order it, so I did exactly that. 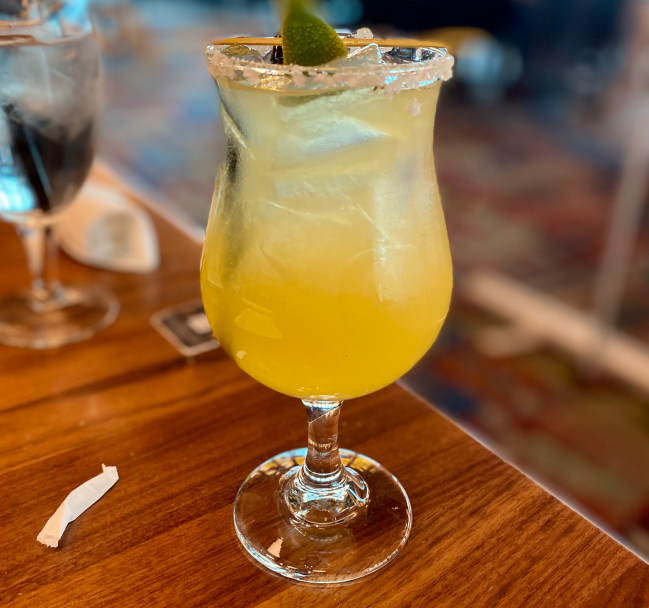 Was it an objectively good drink?  Well, no. The smokiness of the mezcal was basically non-existent and it was about as sweet as you’d expect a cocktail made with Red Bull to be. However, much like there’s no better drink to throw back at the beach than a Corona with a lime inside the bottle, the Santorita was absolutely perfect considering the circumstances.

There was also no chance I was going to leave without ordering the famous dish—nay; experience—known as Trash Can Nachos, which were served up in a metal container before the server expertly deposited them onto an awaiting plate with a flourish. 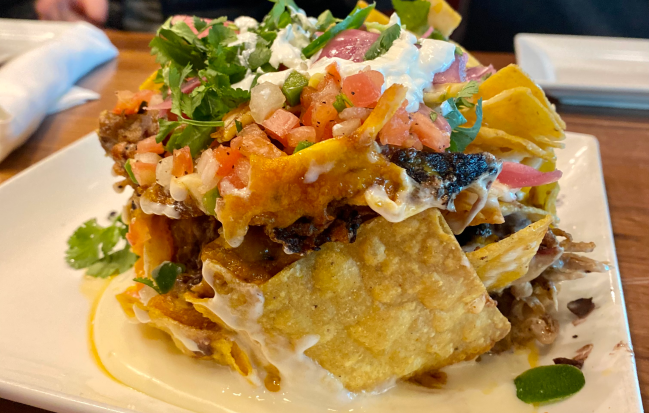 One of my biggest gripes with Guy Fieri’s critics is their penchant to criticize his food even though they’ve likely never tried it. A few years ago, I picked up one of his cookbooks and was surprised at just how solid most of the recipes were, and Trash Can Nachos are certainly no exception. Sure, you can feel them taking the express route to your waistline as soon as you swallow, but the combination of the Super Melty Cheese™, perfectly tender pulled pork, and all of the accouterments is my definition of “comfort food.”

I opted to go with the Bacon Mac-N-Cheese Burger for the main course for reasons that should be obvious if you simply read its name (although I decided to skip the tomato because I didn’t want to consume anything remotely healthy in a setting like that.) That came after I was dissuaded from ordering an entire plate of garlic fries thanks to my server, who was kind enough to let me know I could simply upgrade to the ones that come as a side for an extra $3.

It’s touches like that one that made me feel like they genuinely appreciated me picking Flavortown as the destination for this brief vacation.

I would’ve normally been a little annoyed with how long it took for my entrée to come out of the kitchen, but it actually provided me with the perfect opportunity to sit and soak in my surroundings while sipping from the solid IPA that had earned a spot in Guy’s Rotational Seasonal Selection. This was only enhanced by the impeccably curated playlist that served as the soundtrack, including “Tom Sawyer,” multiple Guns N’ Roses songs, and “Break On Through” by The Doors, which seemed particularly apropos considering how close it feels like we’re getting to the end of the COVID tunnel.

When the burger arrived (complete with a plate featuring an incredibly on-brand picture of a skull wearing a chef’s hat,) I realized it was one of those Instagram-friendly dishes piled so high with ingredients that you’d need the jaw of a snake to actually take a bite of the whole thing. 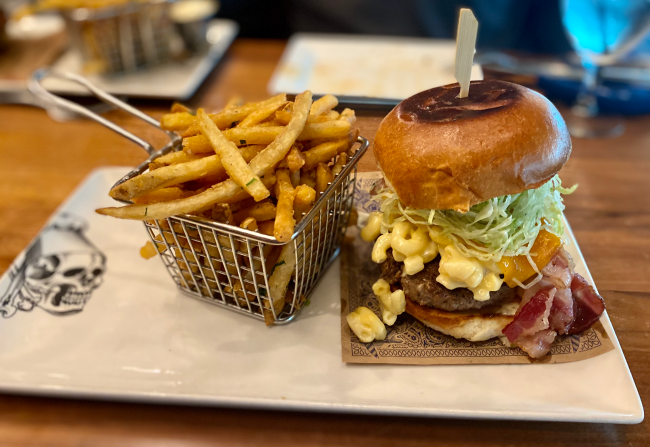 I wish I could say the amount of work I had to put in to figure out how to attack it was worth the payoff, but in this case, it was a pretty run-of-the-mill burger that never really had a chance of coming together based on the sheer amount ingredients packed between the buns.

However, there was once again a silver lining here. Thanks to the burger’s fairly underwhelming nature, I once again got the chance to just sit and revel in the sheer normalcy of the experience. However, I knew things had to come to an end at some point, but when I threw on a mask and prepared to be thrust back into reality, I couldn’t help but snap one last picture that may sum up the entire experience better than all of the things I just took the time to write. 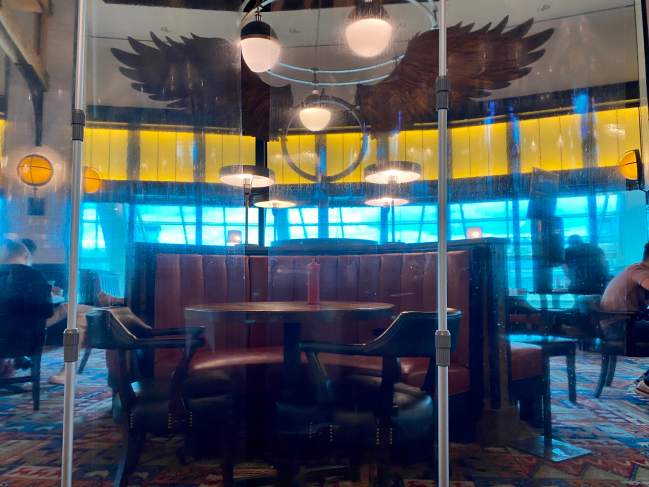 Is that art? I’m not saying it is, but I’m also not going to say it isn’t.

Do I wish I could’ve stayed for a bit longer? For sure, but to paraphrase Wet Hot American Summer: it’s always nice to go to Flavortown, even if it’s just for a couple of hours.