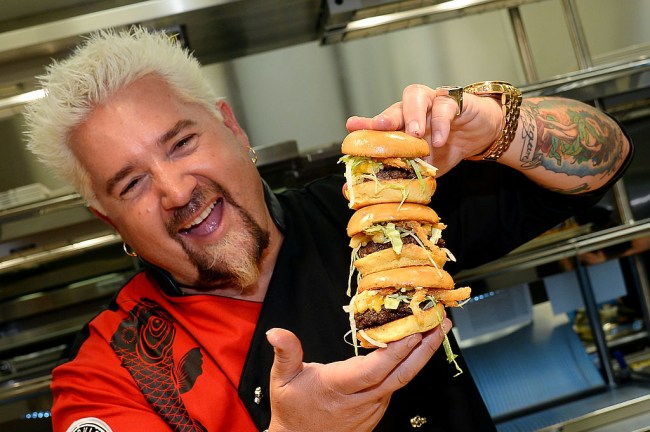 I’ve spent a lot of time on the internet in my day, and over the course of my online travels, I’ve stumbled upon plenty of things that you can’t unsee that have rocked me to my core.

However, there’s one particular photo that’s seared into my mind more than any other: Guy Fieri with normal hair.

here's what celebrity chef @GuyFieri might look like with a "normal" hairstyle, if anyone's into that sort of thing. pic.twitter.com/DGDpyjzYNh

I was under the impression that the celebrity chef came out of the womb rocking a goatee and some gorgeous bleached locks, and while that picture might be Photoshopped, it turns out Fieri hasn’t always been rocking his signature ‘do.

Hey @gewqk were you diggin through my family photos? #tbt to 2000 watchin the @SFGiants pic.twitter.com/jhppB51Rs5

At some point in life, Fieri made the choice to become the personification of an Ed Hardy store but it turns out the decision wasn’t entirely his based on a recent story that appeared in People.

Fieri’s wife Lori says Guy hasn’t always been the flamboyant chef we know and love today and that he was a fairly clean-cut dude when they first met at a restaurant in California all the way back in 1992 (there was apparently a time when he used to wear a suit to work instead of a flame-covered bowling shirt).

As for his hair? Guy says he wasn’t even the person responsible for his now-signature look and that all credit goes to the hairdresser who was given free rein over his locks:

“I was just kind of having one of those moods one day, and said, ‘Just do whatever you want.’ She goes, ‘Whatever I want?’ ‘Whatever you want.’ I get done and I’m like, ‘You gonna wash that out, that shampoo?’ She goes, ‘No, that’s your hair color.’ I’m like, ‘My what!’ It was Friday night at like six o’clock. I had to be at the restaurant. I’m like, ‘No.’ She’s like, ‘Yeah.’ So I put a ball cap on and walked to the restaurant.”

Guy says he’s experimented with different shades but eventually settled on the bleached hairdo, and while Lori says part of her wishes he’d switch things up, it appears she’s come to terms with the reality that it’s here to stay.

I couldn’t be happier that it is.