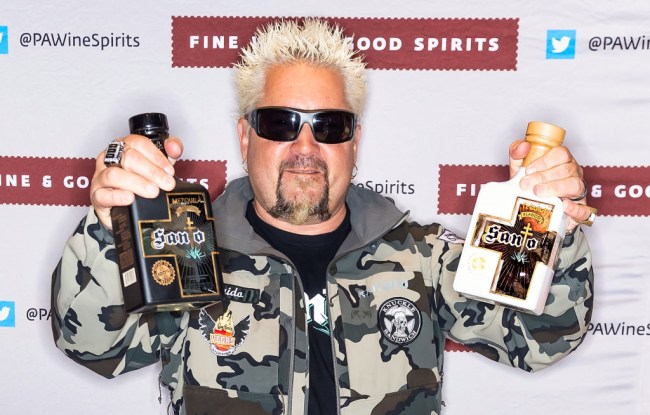 Guy Fieri has shown time and time again what it means to be a leader in the wake of a tragedy. He’s served BBQ to thousands who lost their homes in the California wildfires, multiple times over. He’s worked exhaustively with the Make-A-Wish Foundation. In 2017, he helped serve 3.5 million meals in Puerto Rico after the island was devastated by Hurricane Mariae.

In a time of crisis, the Mayor Of Flavor Town rises to the occasion.

Guy Fieri is a badass like that, even though he’s humble enough to tell you otherwise.

With the coronavirus crisis wrecking havoc restaurant workers around America, the host of Diners, Drive-ins and Dives is teaming up with a handful of major brands to create the Restaurant Employee Relief Fund.

According to a press release, impacted restaurant workers will be able to apply online for a one-time, $500 check to use towards housing, transportation, utilities, child-care, groceries, medical bills and/or student loans, starting on April 2, 2020. These grants will be administered by the NRAEF and offered on a first-come, first-served basis. Registration can be done at RERF.US.

“My entire career has been in the restaurant business,” said Guy Fieri in a statement.

“From bussing tables to flambe captain to dishwasher to chef… I’ve done it all. I’ve also spent the better part of the last 15 years traveling this great country meeting other folks who’ve dedicated their lives to this business and let me tell you something, they are the hardest working, most real deal workers you’ve ever met… the heartbeats of their communities. But they need our help and with Restaurant Relief America, we can serve up some support when these restaurant employees need it most… right now.”

Help serve up some support for the restaurant employees of America! These people are some of the hardest working, real deal workers you’ll ever meet, and they need our help. #RaisetheRERF @NRAEF

In a statement, Rob Gifford, President of the National Restaurant Association Educational Foundation, says individuals can help chip in too to help restaurants works:

“Early estimates indicate that as many as five to seven million restaurant workers may lose their jobs due to the COVID-19 crisis. In the face of this pandemic, we are asking the nation to join us in protecting vulnerable restaurant workers through your generous financial support. Please donate online immediately at RERF.US so we can help those in need.”

Bro move from Guy to lead the charge for his fellow foodservice and hospitality workers. As people support their favorite restaurants with takeout and gift cards in these uncertain times, hopefully everyone can get the help they need.

I like waking up to the smell of bacon, sue me pic.twitter.com/0PppFXFBAx