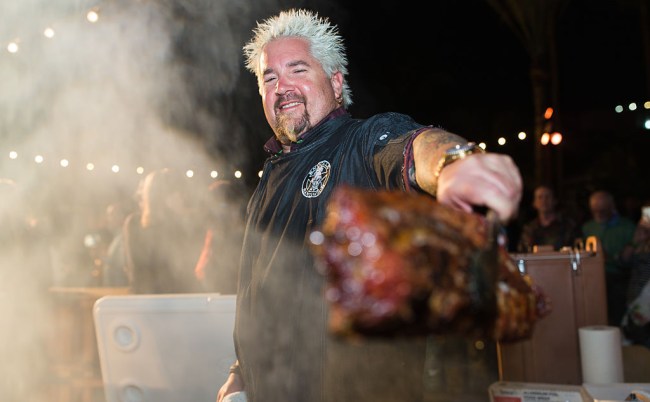 Over the years, television has been home to countless celebrity chefs ranging all the way back to the days of Julia Child, who set the stage for the likes of Emeril and his signature *BAM*ing, Gordon Ramsey’s trademark blowups, and Martha Stewart’s felony convictions.

While he might not necessarily be the biggest culinary trailblazer, as far as I’m concerned, none of those aforementioned people have shit on Guy Fieri.

It’s hard to believe it’s been over a decade since the Mayor of Flavortown was dubbed “The Next Food Network Star,” but since then, he’s transcended television and became a veritable cultural icon for reasons I don’t think anyone still entirely understands.

Thanks to his frosted tips and fire-covered bowling shirts, Fieri is worshipped by a cult of Oakley-rocking followers with a penchant for Donkey Sauce (a.k.a. aioli) who have founded bar crawls in his honor.

Well that was my Saturday. What did you do? #FieriCon pic.twitter.com/3217WYjDKn

Fieri might be some weird culinary meme, but on multiple occasions, he’s also proved he’s a pretty damn good guy— and now he’s done it once again.

The deadliest wildfire in the history of California is currently sweeping across Butte County and has already claimed the lives of dozens of people in the process of destroying thousands of buildings as it continues to rage.

Masses of people have been forced to seek refuge from the blaze as thousands of firefighters attempt to extinguish it and Fieri is doing everything he can to bring some much-needed relief into the area.

On Sunday, Fieri traveled to Butte College to pay a visit to the law enforcement officers who are there contributing to the cause and laid out a full spread so the responders could take a moment to sit down and grab a meal.

Guy Fieri made a surprise visit to serve dinner to everyone at the law enforcement staging area at Butte College. Thank you so much Guy for filling our bellies and lifting our spirits. #ButteSheriff #CampFire pic.twitter.com/ZnhNxOa81n

This isn’t the first time Fieri has pulled a bro move like this— the California native cooked food for victims of wildfires in 2017 and did the same thing a few months ago.