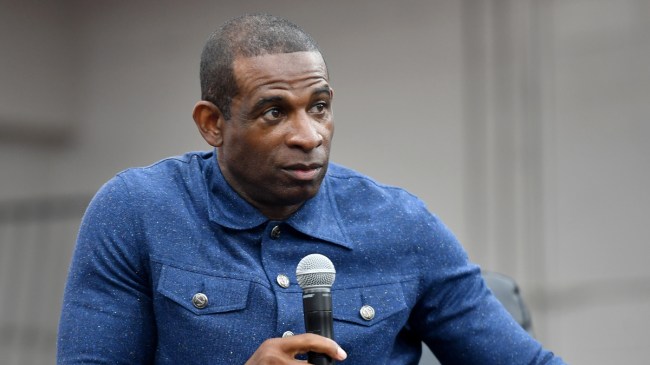 With the regular season winding down, college football programs are finding their new head coaches for next year and beyond. Deion Sanders and the Colorado Buffaloes have been in the rumor mill for quite some time now. Now, the current head coach of the Jackson State Tigers hints at the type of contract he’s seeking in negotiations.

According to PFF College, Deion Sanders shared a post on his Instagram story potentially indicating what he hopes to receive in a new contract. Former Tennessee Titans cornerback Adam “Pacman” Jones shared a pic of a dude repping a Sanders shirt at a basketball game. The shirt reads “A lot of zeros in that contract!”

So, with that, it’s safe to assume that Deion Sanders is looking for a lot of zeros in his contract. As of now, all we know is that Colorado made him an offer after the Jackson State head coach spilled the beans earlier in the week. It’s yet to be determined exactly what they offered, so maybe that will come to light in the coming days.

Either way, Deion Sanders is sure feeding into the rumor mill. He knows exactly what he’s doing. It’s an incredibly smart move to make his negotiations with Colorado more public. Sanders could generate more interest from other schools and potentially create a bidding war.

We’ll see how it plays out. For now, he remains with Jackson State, but with the way everything is playing out, Deion Sanders could be the next head coach of a bigger program soon.