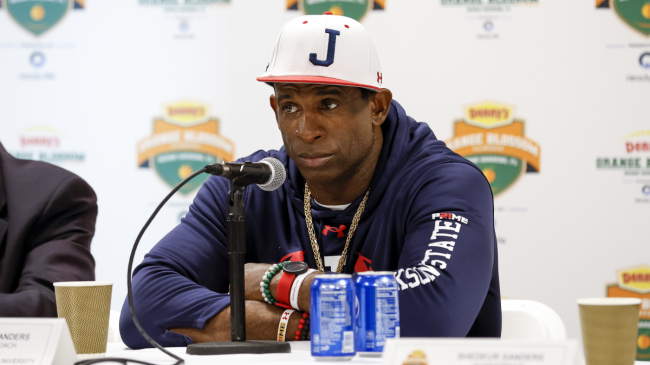 Deion Sanders could be on the move this offseason. The Jackson State head coach has been in contact with a number of notable FBS programs, and he could decide to make the leap from the FCS level in the coming weeks.

The Tigers still have a bowl game left to play, which could impact a timeline on a potential announcement. Still, the overwhelming belief is that he’ll be on his way out of Jackson as he pursues a better opportunity.

Sanders’ top three options appear to consist of a PAC 12 program and a pair of Group of Five teams. According to some reports, a decision could be made by Sunday.

Deion Sanders has been telling recruits he will be at a school on Sunday. Decision appears to be down to Colorado, Cincinnati and USF.

Of the three, Colorado appears to be the program that would offer the most opportunity and resources when talking about recruiting and the ability to hire a staff. While both Cincinnati and South Florida have their perks, the Buffaloes would most certainly be able to offer the most money.

Due to that fact alone, many believe UC to be the leader in the clubhouse to land Coach Prime’s services. Deion Sanders made light of those talks in a recent interview with Jackson State Director of Broadcasting Services Rob Jay.

In the segment, Jay joked with Sanders about the Colorado offer.

Rob Jay: “You know my favorite team is the Kansas City Chiefs, right? Next week, they play the Denver Broncos in Colorado. I’m going. Are we gonna ride together?”

Deion Sanders: “That’s a good one… Why would you assume I’m going to Colorado? You better stop.”

While they don’t bring up the Colorado offer directly, it’s pretty obvious what they’re talking about. Making things even funnier, the back and forth takes place on the Jackson State media set.

Sanders led the Tigers to a perfect 11-0 regular season, winning the SWAC in his second year at the helm. While he’s built a fantastic foundation in Mississippi, the chance to coach at a major university could end up being too good to pass up. We could know about Sanders’ future in the coming days.