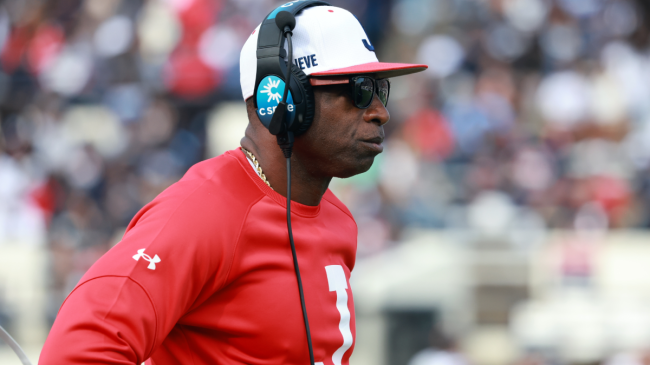 Deion Sanders has become a hot commodity on the head coaching market. Despite currently being on staff at Jackson State, the coach’s name continues to pop up with notable Division I vacancies.

First was Auburn, who recently fired Bryan Harsin just two years into his tenure. The Tigers have underperformed, and they’re swinging for a home run hire this offseason. Sanders, who’s been able to attract top talent to an FCS program in Mississippi, would certainly provide that on The Plains.

Another suitor is Georgia Tech, who plays in Sanders’ former home in Atlanta. As an NFL defensive back, Primetime spent five seasons with the Falcons.

Now, it appears that another set of potential prospects have come calling.

Sources close to Sanders say he’s been in discussions with powerbrokers at both Colorado and South Florida about their coaching vacancies.

On Colorado: The Buffaloes might not fit Sanders’ recruiting footprint, but… with the resources Colorado could offer, Sanders has mapped out a plan to recruit nationally to Boulder.

On USF: South Florida is not as flush with cash but is right in Sanders’ recruiting footprint… He would have an opportunity at South Florida to execute an immediate turnaround similar to what he’s done at Jackson State.

Sanders would undoubtedly provide an immediate boost to either program. His success at JSU combined with his pedigree within the sport would help in recruiting no matter the location.

Jackson State just finished off a perfect 11-0 season in Sanders’ second year at the helm. It could wind up being his last should the right opportunity come calling. Many believe that opportunity is with one of these two schools.

deion would crush at usf. https://t.co/TAI9x6JBIZ

Others, however, think Deion should hold out for a bigger gig with most referencing Sanders’ alma mater, Florida State.

This isn’t the first time Deion Sanders has spoken with other programs. In fact, he interviewed with TCU and Colorado State just last season. It looks like JSU will have to fend off the competition yet again to keep Sanders put.