Deion Sanders Doesn’t Care About Getting Paid $300,000 To Lose Games And Wants To Make History 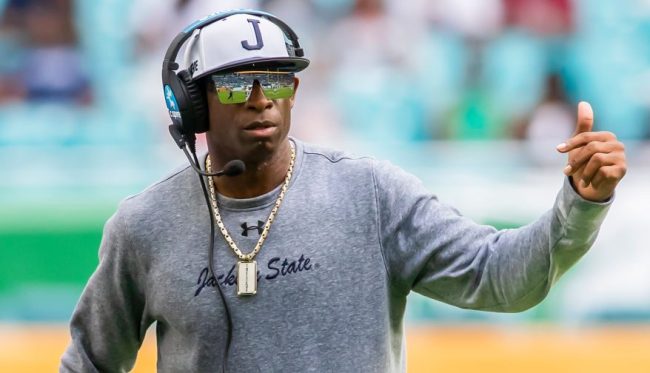 As Jackson State football gears up for its matchup against Louisiana-Monroe on Saturday, head coach Deion Sanders is not interested in the typical narrative of a “buy game.” Instead, Coach Prime is set out to make history.

“Normally you just get paid to go to get beat, right?” Sanders said on a conference call with SWAC media. “That’s really the goal, right? Somebody pays you, your program makes more money than they normally will to go get your butt kicked. I don’t believe in that.”

The standard that Sanders is referring to dates back long before his time in Mississippi. FBS programs around the country have long paid for FCS programs to come in and compete against their team.

The hope is that the FCS program will provide an easy win to boost the record and provide confidence for the FBS team. In many cases, traveling to an FBS school is how the FCS affords to keep its program— with some games paying out millions.

However, Sanders is not interested in getting paid to get mollywhopped.

“Normally when you play against a powerhouse like I see some of the HBCU schools have taken, it helps the budget, but it kills the morale,” Coach Prime said. “How can getting your butt kicked, I mean really kicked, help you as a team? Financially, cool. All money ain’t good money.”

Jackson State, which is 2-0, is seeking its first win against an FBS program since at least 1978. And if the stars were to align for an upset, the opportunity is this weekend.

The Warhawks have lost 12 straight games, tied for the longest losing streak in the nation, and the Tigers are quickly emerging as one of the premier HBCU programs.

An HBCU program has not topped an FBS team since 2018, when North Carolina A&T beat East Carolina. However, eight FCS teams have already beaten FBS teams this season so the ball is rolling in Jackson State’s favor.

In addition, Sanders’ first recruiting class in Mississippi ranked 44 spots higher than that of Louisiana Monroe’s. Despite the legitimate chance for Jackson State to topple an FBS program and get paid to do it, Coach Prime is ready for his team to leave it all on the field and leave the Boot with a dub.

“We just want to go out there and execute, do what we’re blessed to do,” he said. “Excel. We’re going to find out who some players really are this week because you’re going to have a real formidable opponent that we’re supposed the lose by all accounts. We weren’t supposed to be in this game, right? We get paid to get beat, right?”

The game between JSU and ULM kicks off at 7:00pm CST on Saturday night. Can the Tigers make history?