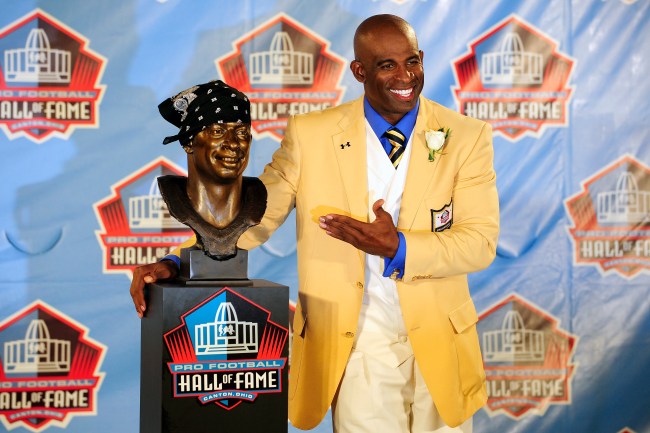 Deion Sanders is one of the most confident (see: cocky) athletes to ever grace the planet, as the man known as “Prime Time” never let anyone go by without letting them know how great he was. He would talk trash to opponents, showboat and (generally) be flashy AF while on the football field, which helped separate him from others, while being a main reason why he was so popular. Sanders knew he was the best player on the gridiron, so he took it upon himself to let everyone know that.

Selected No. 5 overall by the Atlanta Falcons in the 1989 NFL Draft, Sanders’ cockiness came out in a big way in the pre-draft evaluations. That’s because, when the New York Giants showed interest in picking him No. 18 overall, Deion disrespected them in a big way, refusing to take a written test that the franchise gave all prospects to better familiarize themselves with the player. Just take a look at Deion Sanders’ ruthless reply to the Giants’ request below, which was recently tweeted by Bleacher Report.

This is the definition of savage, isn’t it? Sanders gave zero fucks about the Giants’ interest, and knew that there was no way in hell he’d fall to them at No. 18 in the 1989 NFL Draft. There’s confidence, then there’s Prime Time confidence — which is a level many people could only dream about having.

To better understand the entire exchange, here’s Deion Sanders recounting the story during a 2017 interview.

“I was in the Giants room … they sat me down and gave me a thick book — thicker than a phone book.

They said, ‘This is our test we give all the players.’

I said, ‘Excuse me, what pick do you have in the draft?’

Maybe Sanders had the Giants’ draft positioning wrong, but, hey, doesn’t matter, because the statement was heard loud and clear: He wasn’t wasting his (prime) time to take some damn written test from the team. Seriously, nobody was more brash than Sanders, man.

While Deion became one of four future NFL Hall of Famers chosen in the first five picks of that 1989 NFL Draft, the Giants did win the Super Bowl in 1991, so maybe they got the last laugh here. Still, Prime walked away with two rings himself, a ton of individual accolades and one helluva great story that we’re still bragging about over 30 years later.