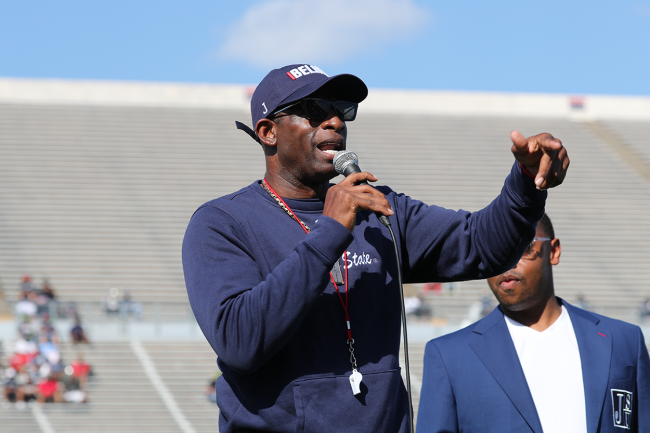 Deion Sanders has captained a remarkable turnaround at Jackson State. He took over a football program that hadn’t won more than five games since 2013, recorded a winning record in Year 1 and then led the Tigers to its best record in school history in Year 2.

In addition to the on-field success, Coach Prime has landed two of the best recruiting classes in FCS history. He even flipped the nation’s No. 1 recruit away from Florida State on National Signing Day.

With the compound success and additional talent headed to Mississippi this fall, there are high expectations for Jackson State. If Sanders and the Tigers do not win the SWAC again in 2022, it would be a disappointment.

He wants them to be great.

And that doesn’t just include his players. It goes for every single person involved with the program— from top to bottom.

After practice earlier this week, Coach Prime pulled his assistants, managers, waterboys and girls, videographers, and every one who has a hand in day-to-day operations together to deliver a message about the standard. He expects that they, just like his players, give their all in every moment.

Deion Sanders even called out the Jackson State staff for a lack of commitment.

Sanders’ message is not only a fantastic reminder of how to approach your day, it is also unique to see how the NFL Hall of Famer treats the people in and around his program equally. Not many coaches would take the time to talk to his assistants like Coach Prime.