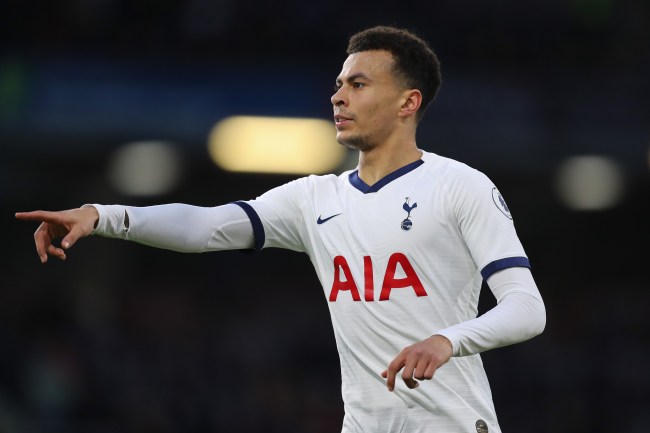 Tottenham Hotspur midfielder Dele Alli has been isolating at his North London home during the past few months with his brother and their partners. In the wee hours of Wednesday morning (Tuesday night), knife-wielding burglars broke into the house and held him at knifepoint while stealing expensive jewelry and leaving him with facial injuries from punching him in the face.

Everything about this incident enrages me and not just because I’m a Spurs fan. You have to be one of the worst people on the planet to break into someone’s home and rob them with a weapon, to beat them, and to do this during a time when everyone’s locked at home because of a global health crisis.

Seriously, these people need to be found and locked up in jail for the rest of their lives.

Here’s the report from The Guardian:

Two men broke into the property just after midnight on Wednesday morning and threatened the England international. He sustained a facial injury before the intruders fled.

The attackers took numerous items from the house including jewelry and watches. Police are understood to be reviewing CCTV footage of the incident in Hadley Wood.

The Metropolitan police said: “Police were called at approximately 00:35 on Wednesday 13 May to reports of a robbery at a residential address in Barnet.

“Two males gained entry to the property and stole items of jewelry, including watches, before fleeing. One male occupant of the property, aged in his 20s, suffered a minor facial injury after being assaulted. He did not require hospital treatment. No arrests; enquiries into the circumstances continue.” (via)

Thank you for all the messages. Horrible experience but we’re all okay now. Appreciate the support.

This is just two months after another Tottenham Hotspur player, Jan Vertonghen, was robbed. And back in November, a person was sentenced to 10 years in jail for attempting to rob Arsenal’s Mesut Özil and Sead Kolasinac of their luxury watches.

These people are the worst. Everyone’s miserable right now. Even the multi-millionaires like Dele Alli. A person’s level of success/wealth doesn’t mean they can’t feel trapped and stressed during every waking moment right now. Everyone’s entitled to be miserable during this strange time. And a person who thinks NOW is the time (or anytime) to rob someone at knifepoint and make their lives even more miserable has to be one of the worst people on the planet. Seriously, find this person and throw them in prison forever. End of story.