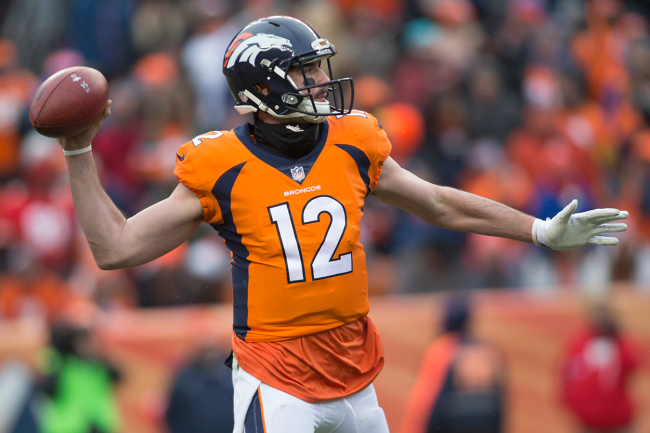 The Paxton Lynch era in Denver did not go well, but the Broncos cannot escape. Despite years between drafting the former Memphis quarterback and today, the team will forever be haunted by his presence when they take the field at the practice facility.

Lynch, who threw 28 touchdowns to only four interceptions as a senior in 2015, led the Tigers to a 9-4 record that year after beginning the season 8-0 with a win over No. 13 Ole Miss. Despite the struggles down the stretch and an eventual bowl loss to Auburn, Lynch impressed NFL scouts with his arm.

At 6-foot-7, 245-pounds, the former three-star recruit played well above his grade. As a result of his strong play and significant frame, John Elway and the Denver Broncos decided to trade up and take Lynch with the No. 26 overall pick in the 2016 NFL Draft.

The decision ended up being a bust.

Lynch played two years in Denver, made four starts, threw four touchdowns, and also threw four interceptions. When 2018 rolled around, his third year in the league, Lynch lost his backup spot to Chad Kelly and was released.

Before his NFL career came to a close in 2020, Lynch bounced around between the Seahawks and Steelers on both the practice squad and active roster. He was eventually cut, spent time as a third-string quarterback in Canada and now backs up Shea Patterson in the USFL.

Needless to say, spending a first round NFL Draft pick on Paxton Lynch was a bad idea for the Denver Broncos.

Although the franchise surely wants to escape the Lynch era, it cannot. It is literally reminded of the first round bust every single time that it walks into the practice facility.

On the wall in Pat Bowlen Fieldhouse is a permanent reminder of the quarterback— the ‘Paxton Patch.’

In honor of Paxton Lynch playing for the USFL’s Michigan Panthers today, here is the mark he left in the Pat Bowlen Fieldhouse one training-camp day — the “Paxton Patch.” pic.twitter.com/Dprdd3lOpn

As far as can be told, the ‘Paxton Patch’ remains on the white wall in the facility to this day. Its origin story is not great.

According to the folklore, which isn’t confirmed as the truth, the ball mark came from one of Lynch’s worst throws in training camp.

During a red zone drill prior to either the 2016 or 2017 season, Lynch faced fourth down and goal. Rather than trying to make a play, the story goes that he threw it away and left the mark on the wall.

Lynch threw it away. On fourth down. In practice.

And now the Broncos will never forget.