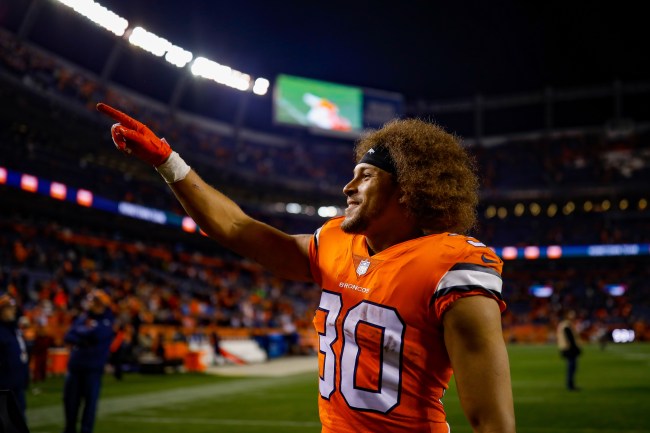 The Denver Broncos are, surprisingly, in the hunt for a playoff berth this season thanks to some big-time wins the past couple of weeks over the L.A. Chargers and Pittsburgh Steelers. Another key reason, though? Rookie running back Phillip Lindsay, who has come on strong as a dual-threat runner and receiver, and is leading the team in all-purpose yards. Not too bad for an undrafted free agent, huh?

Given Lindsay’s success, one might think that he’s living up the fame and trying to take advantage of guiding the Broncos. After all, the dude’s still only 24 years old, so a bunch of us would probably take the $495,000 salary he’s making and spend it a little bit unwisely. Not Lindsay, though, because he’s actually still living at in his parents’ basement, doing the same chores he did while he was a teenager.

According to NBC 9 News, that’s just the way the Denver Broncos star running back wants it, though.

Lindsay lives at mom and dad’s house, sleeping in his downstairs bedroom by night, and practicing with his hometown Broncos by day. Sundays, the hometown kid enters a whole new universe.

“I’m being smart right now,’’ Lindsay said during a sit-down interview with 9NEWS this week. “I did go undrafted so it’s about saving money and being smart with your money right now.’’

Sounds pretty smart, right? After all, most millennials are living with their parents right after college anyway, so Phillip Lindsay’s just doing what some of his other peers are — well, other than the fact that he’s busting NFL defenders in the mouth every Sunday.

And, just like a teenager would have chores to do, Lindsay’s parents seem to hold him to the whole “my house, my rules” mantra, because the rookie still has to lend a helping hand.

Hey, considering this dude’s one of the top rookies in the NFL and is helping the Denver Broncos steal a playoff spot, having to clean his room when mom or dad asks doesn’t sound like such a bad task.