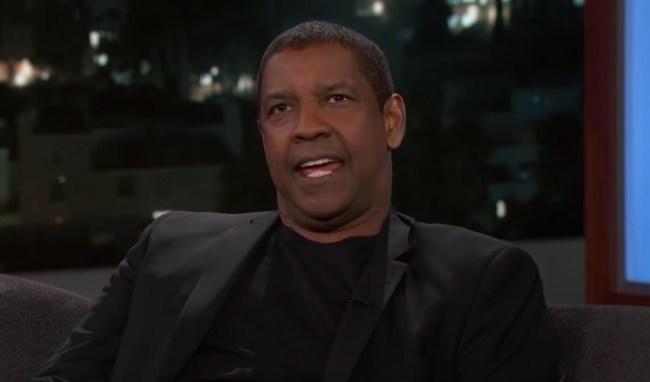 Denzel Washington is a Los Angeles Lakers season ticket holder, he was also a guest on Jimmy Kimmel Live last night. The biggest buzz in Hollywood right now is surrounding LeBron James. LeBron had people waiting in line for HOURS yesterday in Culver City to catch a glimpse of him and score some free pizza, but instead of showing up to his own pizza party he stayed at home and sat on donut pool float.

So when Denzil showed up to be interviewed by Jimmy Kimmel they got to talking about basketball pretty quickly. Jimmy was grilling Denzel on who he thinks the greatest player of all time is, to which Denzel was pretty hesitant to answer. Which makes sense given how tight Denzel and Magic Johnson are. If you’re Denzel, you don’t want to offend your close friend Magic and you don’t want to wall off a potential friendship with LeBron James now that he’s in town. But, Denzel tells a great Michael Jordan story about being there for that shot and trying to get MJ drunk before he played the Lakers:

Being a celebrity has to be the strangest experience. You get to go anywhere you want, meet anybody you want, and every door is open. All that, and you can’t even pick who the greatest all-time basketball player is because it’ll potentially offend Shaq, Kobe, LeBron, Magic, Mike, and more.