Lakers Fans Waited In Line For Hours For LeBron James To Show Up At Pizza Party, He No-Shows To Chill In His Pool On A Donut Floatie 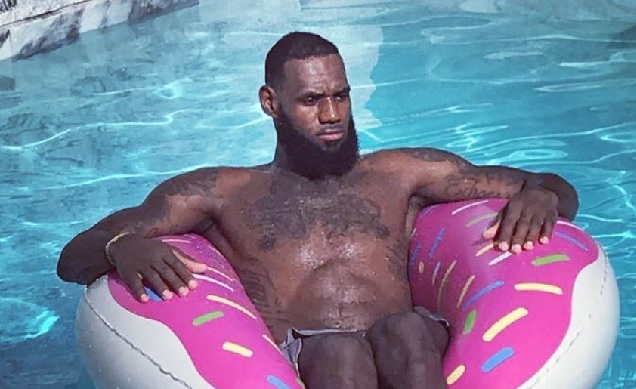 Last night, Blaze Pizza announced they were throwing a party to celebrate LeBron James’ decision to join the Los Angeles Lakers, and LeBron teased that he would make an appearance with this tweet.

Haven’t been to a pizza party in a minute 🤔 Culver City? 👀🍕 https://t.co/1QxgALyekK

On Tuesday afterrnoon, hundreds of fans showed up to catch a glimpse of LeBron at the Blaze pizza in Culver City.

On a humid Tuesday morning, fans began lining up at the Culver City location in hopes of seeing the three-time NBA champion. The line stretched around the business as people braved the hot temperatures.

“He’s a celebrity and it’s a once-in-a-lifetime for me,” said Yolanda Echirivel, of Culver City. “I don’t think I’ll get to see him again in person.”

ABC7 asked Jonathan Argueta if he thinks James will indeed appear at the pizza shop.

“I think so,” the Highland Park resident said. “There’s like a 99 percent chance he’s coming here.”

What will he say to James if given the opportunity?

“Welcome to L.A.,” Argueta said. “And thanks for coming. Hope we win a bunch of championships with you here.”

An hour before @KingJames is set to show up to @BlazePizza event, the line wraps around the corner, through the parking lot, and all the way down the block. Unsure if people are here to meet LeBron or for the free pizza. Will update. pic.twitter.com/PK67xAYnTl

Line now wraps around three city blocks, close to snaking back to where it starts. pic.twitter.com/1IGIy68jaY

It’s not about the free pizza anymore. It’s about seeing LeBron. pic.twitter.com/PzLGgFg9du

Elise and Rick Wetzel, founders of @BlazePizza, are ready to welcome LeBron to L.A. pic.twitter.com/nE1eTEJPe5

Everyone here is expecting to see LeBron at the Blaze Pizza in Culver City. pic.twitter.com/v9MVrM4MqT

“We don’t know if it’s happening or if it’s not” Blaze corporate employee says about LeBron showing up. Meanwhile there are hundreds of people in the parking lot surrounded by thousands of fans around the block. He’s coming.

People thought LeBron would be here by 2:30. It’s 4:00 now. The Blaze CMO is unsure if LeBron is coming. Morale is low.

It’s 4:21 p.m. Still no LeBron. People are offering cash for portable chargers and debating if it’s worth going to Chipotle. Children, once jubilantly dribbling basketballs, are now unmistakably glum.

It’s 5:00. The free pizza event at @BlazePizza is over. LeBron is not here. The “line” has turned into a mob around the front door. People are hungry. People are upset. People are asking, “Why?”

LeBron will not be showing up for the Blaze Pizza party here, an employee just announced.

After the pizza party was announced to be over, LeBron’s wife posted a photo of LeBron chilling at home floating around the pool in a pink donut floatie.