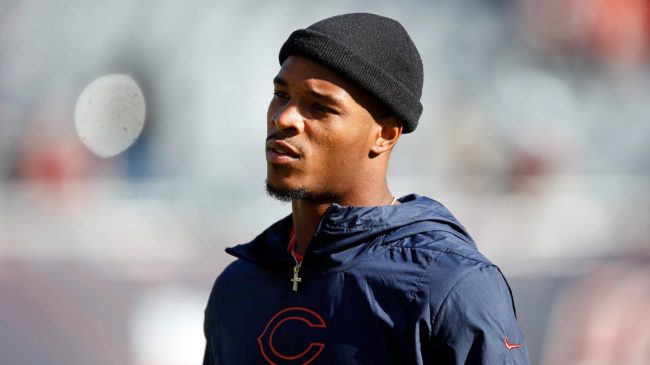 Former Chicago Bears safety Deon Bush was excited to announce his future plans to his new fanbase this morning.

The seventh-year player out of the University of Miami signed a one-year deal with Kansas City on Wednesday morning. During his time in the Windy City, Bush started 12 games, recording 89 tackles and three interceptions. He should add some experienced depth to the Chiefs’ secondary.

As most players do, Bush took to social media to announce the exciting news of his signing and receive what he thought would be a warm welcome from the Kansas City faithful.

Unfortunately, the timing of that tweet was, let’s say, not the best.

Shortly after Bush gave his introduction, the Chiefs announced that they’d be trading star WR Tyreek Hill to the Dolphins. Losing one of their favorite players certainly didn’t sit well with Kansas City followers, and they hilariously responded to Bush’s post voicing their frustrations.

not now deon. read the room.

Can you play WR

Deon walking in on his first day… pic.twitter.com/EKKa6mkore

You picked a bad day to say hello. Don’t take it personally, the Kingdom is dealing with some things.

Not right now.. Tweet this in a couple of days 😒 pic.twitter.com/UXyZtBWcTe

Wild day in the Kingdom, but welcome, sir! pic.twitter.com/UVvBbDmnO2

Bush’s intro couldn’t have come at a worse time for Chiefs fans, but he played along. He sent a joking apology tweet after seeing some of the response.

I’m sure the Kansas City faithful will welcome Bush in with open arms, and he should be a nice addition for the upcoming NFL season. He just chose the absolute worst day to try and interact with the fanbase.