NFL World Reacts To Tyreek Hill Being Traded To The Dolphins, What Chiefs Got In Return 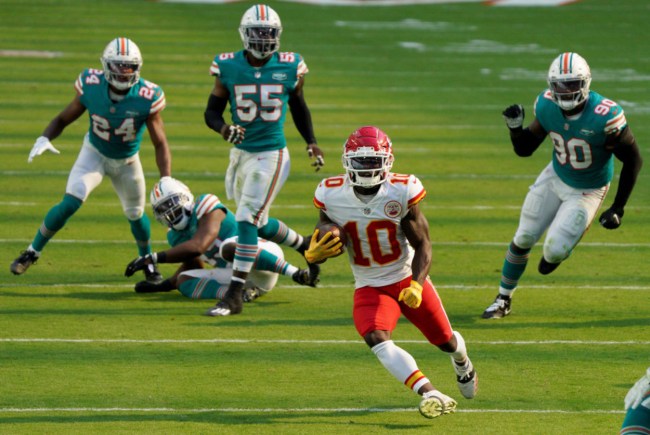 While there have been a number of huge trades taken place this NFL offseason, arguably the biggest move came on Wednesday with the Kansas City Chiefs trading superstar wideout Tyreek Hill to the Miami Dolphins.

Ian Rapaport reported that the Chiefs had given Hill’s agent permission to seek a trade as contract talks had stalled between the two. Rapaport’s initial tweet was shared at 11:04 AM EST and Hill was traded to Miami exactly 30 minutes later.

Here it is: The #Chiefs are trading six-time Pro Bowl WR Tyreek Hill to the #Dolphins, sources tell me and @TomPelissero.

The return is a first-round pick and more, while Hill gets a contract extension that puts him among the highest paid WRs in the NFL.

Hill was set to become a free agent following the 2022 season, but has already signed an extension with the Dolphins.

The 28-year-old signed a four-year extension worth $120 million with just over $72 million guaranteed.

The NFL world had quite a reaction to the news of Hill heading to Miami:

How Tyreek Hill will look this season: pic.twitter.com/9nOScWgloF

Dolphins now have strong argument of having the NFL’s fastest offense with Tyreek Hill & Jaylen Waddle as top receivers, Chase Edmonds and Raheem Mostert at running back and Mike Gesicki at tight end.

Tua and HC Mike McDaniel is going to have a lot of fun with these playmakers.

Has to be an error. I refuse to believe this. Chiefs got something better in return. https://t.co/DQLgQeR5C3

Not good enough. The Chiefs have the worst roster in the AFC West as it stands. Very scary spot to be in. https://t.co/pDDlCgF1Gp

This is LOW compensation for Tyreek Hill.
Effectively 2 2nd Rd picks and change.

The league is drunk https://t.co/FE5OvmzgPk

Tyreek hill isn’t dumb – he knows that Florida doesn’t have state income tax! Will save millions of dollars over the life of that contract https://t.co/z35VnE8zk6