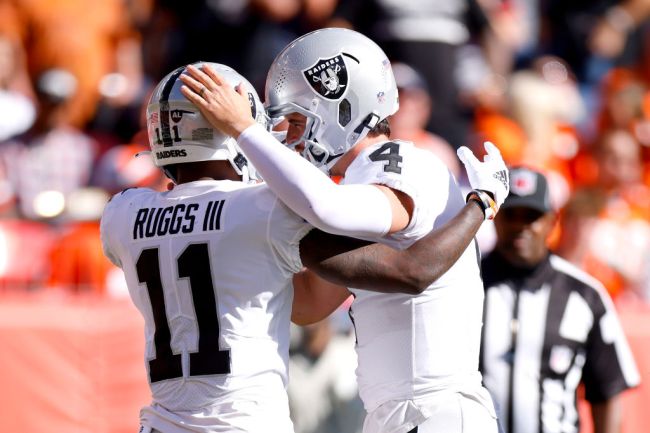 Derek Carr still has Henry Ruggs’ back despite the fact prosecutors say the now-former NFL wide receiver is at fault for killing a woman and her dog in a fatal car crash earlier this week.

According to police reports, an intoxicated Ruggs was traveling at 156 mph before he hit 23-year-old Tina Tintor’s car, leaving her trapped as the vehicle burst into flames.

• Reportedly driving 156 MPH before the crash
• Airbags were released at about 127 MPH
• Ruggs’ blood alcohol level was 2x the legal limit
• He had a loaded gun in his car pic.twitter.com/5SYbVQALoO

On Wednesday, Derek Carr spoke to the media about the crash and vowed to be by Ruggs’ side because he feels his former teammate “needs people to love him right now.”

Derek Carr says he'll continue to be there for Henry Ruggs: “He needs to be loved right now, and if no one else will do it, I'll do it." pic.twitter.com/C4198gjJpr

“I haven’t reached out, I will always be here for him,”That won’t change, and I’ll prove that over the course of time to him…He needs people to love him right now. He’s probably feeling a certain type of way about himself right now, and he needs to be loved. And if no one else will do it, I’ll do it.”