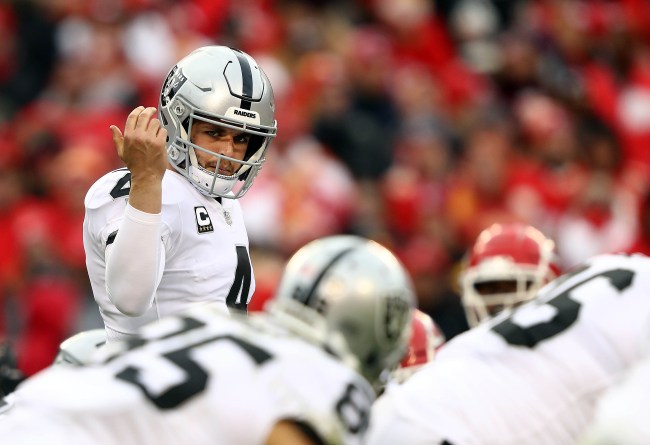 Early this morning, First Take host Max Kellerman talked about how the Raiders should draft Kyler Murray after implying that Carr quit on the team last season.

You can see when quarterbacks don’t want it. Carr didn’t want it. I think Gruden knows they have to move on. The question is can they get anything for him.

Carr apparently saw Kellerman’s quote and challenged him and First Take co-host to a UFC fight.

@ufc @danawhite hey how do I challenge a couple of these clowns on tv to a fight? I think we should start a business together. Where pro athletes can challenge some of these people to an octagon fight until they give us an answer…. You don’t know me… stop lying.

Yes..say what you want but don’t question somebodies character as a man if you don’t know them. Our job as NFL athletes is to try and leave the game better for the next generations. So let’s start an octagon business to give some accountability to these kinds of people. 😉😂👊🏼

Stepgen A Smith fired back at Carr on Twitter and invited him over on the show.

Hey @derekcarrqb…..I heard you had a few things to say. Consider this a personal invitation. You are more than welcome to come on @FirstTake or sit down with me for a 1-on-1. I’m here, Bro! Nobody hiding.

Here’s the question: why is he talking about getting ME in the octagon instead of a UFC fighter, @danawhite. What do I have to do with the sorry-ass season the @Raiders. All I did was observe. But I’ll deal with this on @FirstTake. Yo, @derekcarrqb: Wrong Brother! https://t.co/rcjDxYyGYL

I would to see Carr go on First Take to confront Kellerman and Stephen A. Smith, would be amazing television.